Based largely on satellite data and the results of an airborne data collection mission compiled by the British Antarctic Survey, Bedmap2 by NASA Goddard is a construction of what Antarctica looks like underneath the giant sheet of ice. This iteration of the map used 25 million more observations than the original Bedmap1, which was released in 2001, and provides a more granular view.

Kentaro Mori, Sherri Sunstrum and one other like this
31 Dec 01:56 comradechrisman: The last thing I saw before I died The last thing I saw before I died

Rats fighting then forget why

Favorite thing to blow my mind His Expression is Priceless

Can This Video Actually Hurt You? The kids have it all figured out. That last one is priceless 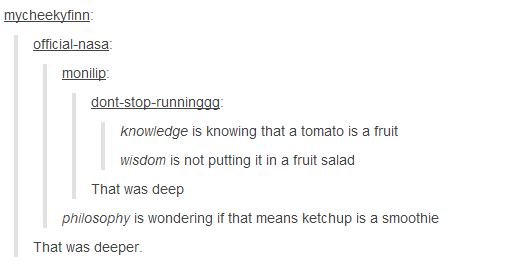 As a key part of a campaign to embed encryption software that it could crack into widely used computer products, the U.S. National Security Agency arranged a secret $10 million contract with RSA, one of the most influential firms in the computer security industry, Reuters has learned.
firehose and -1 others like this
21 Dec 13:34

Thief Tries to Sell Stolen Goods to Their Owner

Daniel Ciamara of Blackburn, Lancashire, England, took a Blu-ray player and a supply of movies to a computer shop and offered them for sale. David Harrison was the clerk on duty and looked through the collection. He noticed that the movies looked very familiar, because he owned every one of them, including two that have never been opened.

Ciamara was told the shop would be interested in buying but said the Blu-ray player would have to be tested.

“Mr Harrison went home and discovered his back door had been kicked in and his house had been burgled,” said Mrs White.

“The police were informed and when the defendant came to collect his money they were waiting.”

The 24-year-old Ciamara later pled guilty to burglary and is awaiting sentencing. -via Arbroath

The Problem with EULAs

Some apps are being distributed with secret Bitcoin-mining software embedded in them. Coins found are sent back to the app owners, of course.

And to make it legal, it's part of the end-user license agreement (EULA):

COMPUTER CALCULATIONS, SECURITY: as part of downloading a Mutual Public, your computer may do mathematical calculations for our affiliated networks to confirm transactions and increase security. Any rewards or fees collected by WBT or our affiliates are the sole property of WBT and our affiliates.

This is a great example of why EULAs are bad. The stunt that resulted in 7,500 people giving Gamestation.co.uk their immortal souls a few years ago was funny, but hijacking users' computers for profit is actually bad.

The mechanical version of a glass harp, called a glass armonica,...

The mechanical version of a glass harp, called a glass armonica, was invented by none other than Benjamin Franklin in 1761. Also, a new word for us: hydrodaktulopsychicharmonica — ”harmonica to produce music for the soul by fingers dipped in water,” (hydro- for “water,” daktul (daktyl) for “finger,” psych- for “soul”). One can be found at the Musée de la Musique in Paris.

There are more glass harps playing in the archives.

As you walk into the amazing Cathedrals and Churches that dot our planet, your first reaction is to look up towards the towering ceilings, the amazing stained glass, and sculptures. Photographer Richard Silver took panorama and turned it on its side to capture the magic of the vaulted ceilings and glorious testaments to religion. These photos may make you feel dizzy as you scroll through them. You feel as if you are rolling your head back to look towards the ceiling, but instead of stopping, you keep bending over until your completely reverse your view. The images capture the entire beauty of the interior of these amazing churches including, St. Vince de Paul in California, Cathedral of the Holy Name in Mumbai, Dominican Church in Krakow, and St. Mathias in Budapest, just to name a few.

The images give a magical view of the churches providing the feeling of just walking into their glory.

Church of the Transfiguration in Krakow

The Church of Saint Augustin in Vienna

Cathedral of the Holy Name in Mumbai

Cathedral of Christ the King in Johannesburg

Via My Modern Met and Richard Silver Photo

Don't Miss Out On These Other Posts!

Sports in a nutshell. [vectorbelly] Sports in a nutshell. [vectorbelly]

What the Fluck! The point at which journalism fails and modern power begins.

Picked this up via @antonyjohnston. It’s a long read, and if you’re in the US, at least, the videos don’t run.

You don’t need the videos.

(Edited to add: apparently the videos DO run. But you still don’t need them.)

It is an excellent, excellent blog post by Adam Curtis, and if you’ve any concern whatsoever about the state of the world, the corruption of capitalism, the destruction of democracies, and the hope of stopping where we’re headed, it is well worth your time. 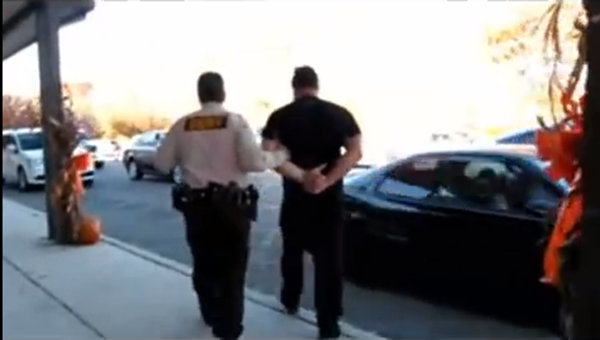 A Tennessee father was arrested recently by an overzealous officer for picking his children up at school by foot. The school’s policy is that children can only be picked up by parents driving cars or kids can board a school bus.

Parents who wish to pick up their children on foot or by bike are apparently shit out of luck. Thankfully I don’t live in Cumberland County, Tennessee, because they would have a fight on their hands.

Jim Howe became concerned about the long line-up of cars that extended over a mile on a busy highway. So he decided to pick up his children by foot, and was told by the school to go back to his car and wait in line like everybody else.

Must Read on The Urban Country:

Here are the more compliant parents, waiting patiently in line to pick up their children: 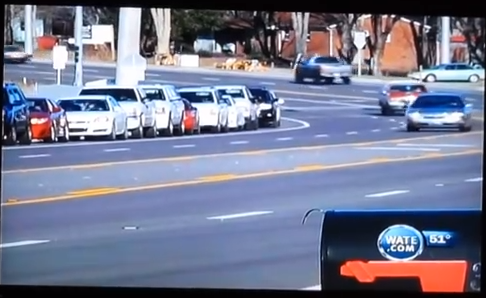 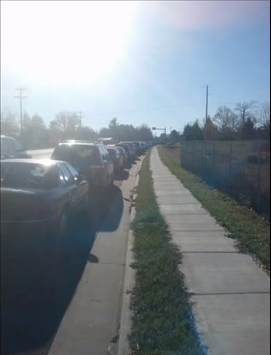 Screenshot from YouTube video of Jim Howe being arrested

The school provided Howe a form to fill out that would permit his children to leave the school alone (his children are 8 years old and 14 years old), but they wouldn’t release his children to him until after the long line-up of cars was gone – to presumably encourage him to get his car and sit in line like a compliant sheep.

Here is the dialogue leading up to the arrest:

Officer: “Guess what. Guess what. It’s the rules. No we’re not going to argue about it”

Howe: “Here’s a rule, here’s a TCA code. School is out, my children are to be given to me. When school is out.”

Howe: “Tennessee state law says within a reasonable amount of time, that is 15 minutes.”

Officer: “Put your hands behind your back.”

Howe: “Okay, no problem. Go ahead. Opening yourself up for a lawsuit.”

Officer: “I’m not staying here arguing with you. Disorderly”

Howe: “That is fine with me”

After going outside, the officer scolds the cameraperson (presumably Howe’s partner) and threatens to arrest her if she doesn’t get out of the way of traffic.

Here is the full video:

Is this how far car culture has gone? It is depressing enough to see a long line-up of cars waiting to pick up children from school, but to prohibit parents from picking up their children on foot or by bike? This is beyond ludicrous.

Every time I witness such a sad spectacle, I reminisce on the lovely scene I witnessed in Amsterdam last year. When school is out, parents socialize in the school yard, and not a single parent pulled up a car to pick up their child. 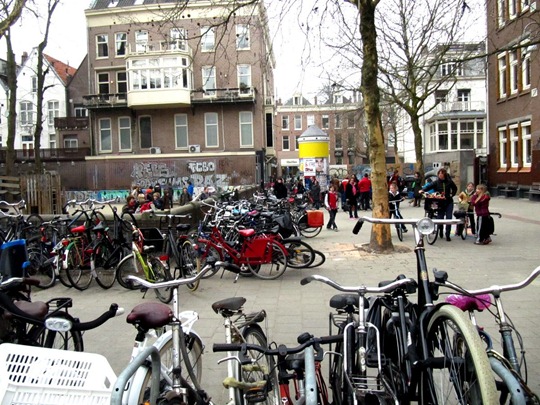 This always revives my hope for the future of our society. But how much more enslaved by car culture will our society become before we start heading down a more rational, logical path, creating more healthy, liveable places to work, live and play.

James D. Schwartz is the Editor of The Urban Country and is based in Toronto, Canada. You can contact James at james.schwartz@theurbancountry.com or follow him on Twitter.

TIL that 82% of teens don't ring the doorbell. They text or call to say they're outside. kaene: selfie DEAL WITH IT

Ana Arantes, Albener Pessoa and one other like this