Twenty percent of beer sold in Oregon is made by Oregon craft brewers, the highest market share for craft beer in the nation

Inside The Largest Buddhist Settlement In The World

Despite its secluded location, the Larung Gar Buddhist Academy in China has grown to be the largest Buddhist settlement in the world, with basic amenities for the 40,000 monks and nuns who reside there. You won't find any TVs, but apparently iPhones are okay.
20 Apr 00:51 Detail from page 1 of “Detective Comics” #31 (the fifth Batman story), scanned from an early 1970s reprint.

the only way to stop a bad guy with a gun 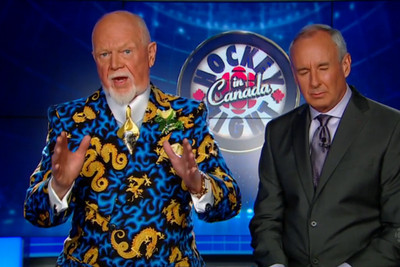 Why is Don Cherry wearing my brothers curtain? pic.twitter.com/dD0UAXX6BY

It's hard to work out what's worse: Wearing a suit made of dragon fabric, or willingly hanging dragon fabric in your home? Okay, that's unfair. If you're REALLY into dragons then who are we to throw shade at your shades?

Before you make the mistake of assuming this is some haute couture fabric let's end that thought right now.

via Rosalind
no satan only corg

Sheller0, Jessica Fantastica and one other like this
20 Apr 00:40

The only real candidate for 2016

he’s been running every year since 1988, I think

by gguillotte
Technically, "Portland Civil Rights: Lift Ev'ry Voice," the new "Oregon Experience" documentary that airs Tuesday, April 21 on OPB (10) is about history, covering significant events in Portland's African American community from World War II through the 1980s. But watching this compelling chronicle, written and produced by Nadine Jelsing, it's hard not to see parallels between past and present. Consider some of the issues raised: increasing gentrification in inner-Portland neighborhoods; tense relations between police and African American residents; inequities in public education; and citizens' demands to be heard by public officials about decisions that affect their lives. The strength of "Portland Civil Rights: Lift Ev'ry Voice," which is narrated by "Grimm" star Russell Hornsby, is how well it explains the decades-old roots of the same conflicts and struggles Portlanders continue to deal with today. Some of those roots are disturbing. Locals infatuated with the "Portlandia" image of our city as a bastion of progressive politics and tolerance may be alarmed to hear that, for many years, Portland was regarded as one of the most segregated American cities outside the South.
20 Apr 00:39 Newswire: Star Wars: Rogue One takes place at the same time as Rebels, may “nod” to it

The hybrid fan ritual/corporate marketing seminar known as Celebration continues to dribble out tidbits of juicy Star Wars information, including a panel on Sunday focused on Godzilla director Gareth Edwards and his upcoming standalone movie, now with the official title Star Wars Anthology: Rogue One. (Chronicle director Josh Trank, who’s been set to direct a second standalone Star Wars film, was also scheduled, but didn’t appear.) The panel, which included producer Kathleen Kennedy and Industrial Light And Magic’s John Knoll, revealed both the movie’s basic plot, and, more importantly for Star Wars fans fatally addicted to continuity and crossovers, how it might interact with other entries in the franchise.

Rogue One’s story will center on the era between Episode III and Episode IV, after the purge of the Jedi by Emperor Palpatine and his henchman, Sad Black Plastic Frankenstein. The absence of the Jedi ...

You Know It's Gentrified When...

You accidentally leave your backpack full of really important shit in the bed of your truck and come back an hour later and it's still there. I'm talking to you, Hawthorne. Thanks, though.

etaribi: i feel you man.. blacknerdproblems:Even as a fictional character Storm is a feminist symbol for Black Women the way...

“Even as a fictional character, Storm is a feminist symbol for Black Women the way that most assume Wonder Woman has been for women all these years. Storm has always been powerful, goddess-like and African. And no, not Charlize Theron, South African. Her dark complexion has always been part of her appearance and it’s not by accident. The same way it isn’t an accident that Storm has become a beacon and symbol for women with darker skin for decades now. The unwillingness to recognize that is just another thunderbolt in the side of a demographic of women who frankly, are plenty used to it by now. Still not understanding the public contempt for this casting choice? Ok…”

- williamevanswrites in his newest written piece on Bryan Singer casting actress Alexandra Shipp as a young Storm for the upcoming the X-Men: Apocalypse film, titled “For Dark Skinned Girls Who Never Get Asked To Play Storm”

imhennyhoe: When you get caught doing something...

When you get caught doing something embarrassing..

This vine is everything. basedgodtookmyusername

1: “ Yeah, I think men and women should be treated equal.”

@ the boys at my school lol

rosalarian:diananock:ruckawriter:thebirdandthebat:maxximoffed: I’m sorry I’m just not over that...

I’m sorry I’m just not over that wolverine cover Logan’s glaring at his dick

Also please note the placement of the beer bottle.

I once was at a show where I asked Esad about this cover.

Esad is a big, cheerful, man with a wicked sense of humor.

He just looked at me.

And then he smiled.

And the smile got bigger.

And he said, “And nobody at Marvel noticed!”

And then he couldn’t stop laughing.

This makes me so happy.

my appointment book is augmented my appointment book is augmented

sorry: Adam Baldwin, even in the video with Nathan Fillion

The fine folks behind the official Firefly Online YouTube account sent a chill down our collective spines when they offered a short glimpse of Nathan Fillion recording his lines as Mal for the upcoming video game based on the much-beloved series.

With a die-hard legion of fans eagerly awaiting a chance at playing in the very universe they so love, there’s been a lot of pressure to get everything right. How does one go about that? Easy. Get the cast back together.

There’s been a steady stream of buzz and excitement centered around the game, and rightly so. Since early February, the Firefly Online YouTube account has been posting teaser videos revealing Serenity’s crew in the studio recording their lines for the game. Half the fun is in the interview questions that they’re asked as a part of the cast reveal, often focusing on what it’s like to return to the universe.

You can catch the entire playlist of returning cast videos below, along with a few new character introductions.

On Friday, the Wall Street Journal published a previously-lost three-page passage of Madeleine L'Engle's 1962 science fantasy book A Wrinkle In Time. L'Engle's granddaughter, Charlotte Jones Voiklis, discovered the passage, which was cut before publication, in her grandmother's draft of the book.

This missing section is unique and interesting in that it contains a more overtly political message than the rest of L'Engle's book, warning against both totalitarianism as well as an over-dependence on security in democracies.

A Wrinkle in Time follows a 13-year-old girl named Meg Murry, her brothers, and her friend Calvin as they search for Meg's father, a government scientist who disappeared during work on a secret experiment.

'It moves current drivers from one side of town to the other. It does not put new drivers on the road. It can't because the prices change every 3-5 minutes.'

minstrelmike writes with this analysis from Nicholas Diakopoulos of the Washington Post: At the core of Uber's wild success and market valuation of over $41 billion is its data and algorithmically fueled approach to matching supply and demand for cars. It's classic economics, supposedly....but is Uber's surge pricing algorithm really doing what they claim? Do surge prices really get more cars on the road? My analysis suggests that rather than motivating a fresh supply of drivers, surge pricing instead re-distributes drivers already on the road. Adds minstrelmike: The writer goes on to analyze 4 weeks of pricing info from 5 areas in D.C. and plotted prices versus wait times. "Price surging can work in any of three ways: by reducing demand for cars (less people want a car for a higher price), by creating new supply (providing an incentive for new drivers to hit the roads), or by shifting supply (drivers) to areas of higher demand." It moves current drivers from one side of town to the other. It does not put new drivers on the road. It can't because the prices change every 3-5 minutes."

I found the coolest mac app for deaf/hoh music lovers!

Basically you put in your audiogram info. Then you load a song. Then you hit calculation and save the song. And the converted song is tailored to your hearing loss. I boosted the equalizer to maximum for my profoundly deaf right ear, though it’s a lifesaver on both sides. Anyway, I highly recommend it.

1,007,000 Americans working full-time earn the federal minimum wage of $7.25 per hour. All of that pay, to all of those people, for all of 2014 adds up to $14 billion dollars. And that is less than half of what employees on Wall Street earned in bonuses alone.

This is your image of the week: Lisa Wade is a professor of sociology at Occidental College and the co-author of Gender: Ideas, Interactions, Institutions. You can follow her on Twitter and Facebook.

not just star trek, but Janeway

“There’s coffee in that nebula”... ehm, I mean... in that #Dragon. pic.twitter.com/9MYrqIOXnI