Yesterday was National Beer Day. In recent years, National Beer Day has grown as commercialized as Christmas, with all sorts of promotions, festivals, and special offers attached to it. But we prefer to celebrate it in the traditional manner, like our grandfathers would have celebrated it had it not been invented in 2009 on Facebook: By drinking Grain Belts from dawn, urinating prolifically, and complaining about progress.

Around the fourth or fifth pitcher, our conversation focused on the current state of craft brewing in the U.S., which, to our palates, has essentially devolved into the current state of craft marketing. There are nearly 2500 craft breweries in the U.S. now â an increase of more than 1000 in under a decade. And we fear that all this rapid growth has led to a craft brewing bubble, a gold rush of sorts, with more and more "brewers" looking to cash in on the craze by slapping a silly name onto the same overly-hopped plonk.

Indeed, we think some of these places spend more time crafting authentic, artisanal-sounding names than they do crafting beer.

We continued to grumble about this for awhile, but then we remembered our no-nonsense, can-do grandfathers. And we thought to ourselves: Would they have just complained about this? Or would they have taken steps to make the situation better, by building a Javascript app that automatically generates craft beer names by combining flavorings, yoga poses, and beer types, so brewers can spend less time marketing and more time actually brewing quality beer?

Clearly, it was the latter. So that's what we did too. Today, in honor of our grandfathers, we give you the MB Craft Beer Name Generator.

This isn't the web's first Craft Beer Name Generator, but we believe it's the best due to our proprietary brewing recipe: take a flavoring or preparation technique, add a yoga pose or bicycle part, and finish with a beer type. So, in an instant craft breweries can achieve memorable, brandable names and focus instead on making actual beer, instead of vats of isomerized alpha acid. A few examples:

Try it for yourself, and let us know what you think.

The culprit that started the craft beer craze. There is one major error in this.

CineFix has released a new episode of 8-Bit Cinema that retells the 1998 comedy film The Big Lebowski in three animated minutes. It was written and animated by David Dutton of Dutton Films with music by Henry Dutton.

Ukrainian Prime Minister Mykola Azarov won't be speaking at a Friday session of the World Economic Forum in Davos, after the organization uninvited him from world leader camp due to the chaos back in home country. The reversal, reported by Buzzfeed, comes a day after three protesters were killed in Ukraine's capital of Kiev. According to Miriam Elder's scoop, Azarov's uninvitation also bans him from the Davos forum entirely.

Azarov previously blamed the protester deaths on the opposition groups supporting the protests, although reports indicate that two of the victims were shot by snipers. The prime minister also called the protesters, who are calling for the end to Azarov's government, "terrorists." Opposition groups in the country are outraged over President Viktor Yanukovych's decision to back away from an agreement with the European Union in November. Instead, Yanukovych and Azarov's government are strengthening their ties with Russia.

The massive protests intensified after Yanukovych approved strict curbs on public protests in the country, prompting organizers to build barricades. The laws, which could sentence those who disseminate "slander" or occupy public buildings to jail or labor, seem to have had the opposite effect.  Three opposition leaders sat down with Yanukovych on Wednesday to try to find a way to end the increasingly violent protests. Opposition organizers have tried to keep the protests peaceful, and some protesters have accused the government of hiring mercenaries to stir up violence in Kiev's Independence Square. Here's how The Washington Post described the scene on Wednesday:

Formations of riot police, holding their shields overhead in a way that made their lines resemble huge, scaly, metal snakes, twice broke through barriers Wednesday morning and swept away the protesters who had been confronting them with stones and molotov cocktails on Hrushevsky Street. Each time, police retreated to their original position, and stone-throwing protesters reoccupied the street.

For now, the political negotiations over the sustained opposition to Yanukovych's government has taken a back seat internationally to the unsettling images emerging from the streets of Kiev as protests continue:

Mike Doughty will send you a personalized song message for just $35,335.53

Mike Doughty apparently thinks a lot of himself. The ex-Soul Coughing frontman is selling personalized versions of one of his unreleased songs for $35,335.53. For roughly the price of a 2013 Chrysler 300 C Sedan, Doughty will record “Dogs/Demons"—a song he’s also never played live—onto a digital recorder, then add a personalized message. Buyers also have the option to choose the song’s key (C, D, or D-sharp), as well as whether they want the song to have a bridge. Doughty will then send the recorder itself, signed and numbered by Doughty, straight to the fan.

For those with only hundreds of dollars to throw away instead of thousands, Doughty is also offering a cheaper version of “Dogs/Demons”: For a mere $543.09, fans get everything but the personalized message, with the optional bridge an additional $267.18. Only fans who buy the ...

Hands-on: Gmail 2.0 for iOS is more Google-Plus-ified than ever (Updated)

Google just keeps doubling down on Google+, but I don't think anyone is using it really.

Google completely redesigned its Gmail app for iOS, releasing the 2.0 version to users through the App Store on Tuesday afternoon. And although the feature list may not be lengthy, the ones that were added have so far been met with great jubilation from regular Gmail users. In addition to being Google-Plus-ified in the UI (which may or may not be a good thing, depending on how you feel about Google+), the app has gained a number of very practical features. These may tempt users of Mail—or even Sparrow—away from their apps of choice.

I decided to take the Gmail 2.0 app for a spin after its release (which is apparently still making its way through the App Store for some users). As noted above, the first thing I noticed was how much the interface has been redone to more closely resemble the redesigned Google+ app released earlier this year. The fonts now match between the apps, and Google uses a clean—but appropriately colorful—layout to draw the eye to the appropriate buttons and avatars. Lots of avatars. Everywhere Google can fit them in. 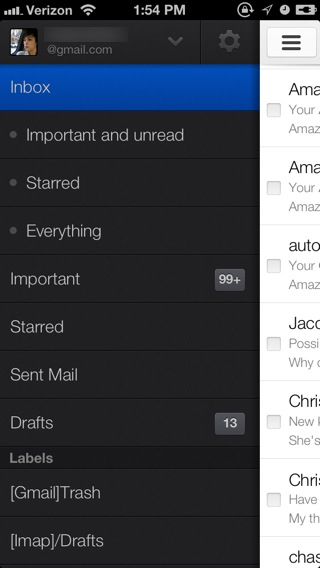 By tapping on the list button at the top left, you can see the various categories you would normally find when browsing Gmail on the Web. Tapping the down arrow from this view exposes the multiple account view, which is new in this version of the app:

60 Seconds in the Life of a Weeble

This thing is pretty slick on an iPad. Better than old Reader ever was.

Part 43 in an ongoing series of (approximately) 60 Second Films.

Okay, this one's a bit longer than 60 seconds, but would you rather have missed the beginning or the end? I couldn't decide. In spirit, it's only 60 seconds long.

Spoiler: Weebles wobble but they don't fall down.

I think the "I feel good getting those flowers" guy is Lou Rizo.

Also, I want the huge box of Dristan to just haul around with me.

Remote Control Magic: The Movie is now available on DVD through DanteFontana.com. Buy it today and begin THE SUPER NEW YOU!

Inception is possible. I've done it.

Don Norman: Google doesn’t get people, it sells them — Tech News and Analysis

I've never heard it put so succinctly: Google's core problem might be their aspergers-like approach to how they treat users.
Juliawmartin likes this
03 Dec 19:35

How to drink Scotch Whisky

Richard Paterson, Whyte & Mackay's master whisky blender, shows us the proper way to enjoy Scotch. It gets a little messy.

Here's another video from the same guy in which he demonstrates what to do when a bartender hands you a Scotch on the rocks. (via the new yorker)