I wouldn’t count myself as a fan of many things, but the derision and disinterest inspired by the first Mirror’s Edge makes me want to champion it. It was a game with terrible boss fights, flawed combat and a tedious story, but also one worth celebrating for the things it got right, such as its first-person movement and its beautiful, brilliant world.

Those same things also make me nervous about the sequel. When I went to see EA’s Mirror’s Edge Catalyst [official site] presentation at Gamescom, I wasn’t sure whether it would amplify the parts I liked or disliked.

Jump to a Random Strip in the Archives! | Archives | E-mail Dave

And thus concludes our Horse Collider trilogy, started Monday and continued Wednesday. Or does it? There are so many unanswered questions! Some of those questions are related to horses. I dunno. We’ll see. 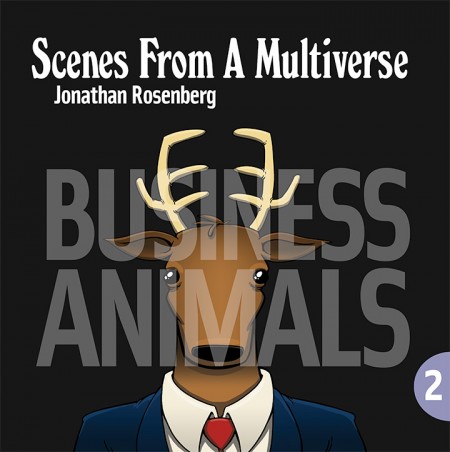 The post Now In Retail Stores Everywhere appeared first on Scenes From A Multiverse.

Naan Bread is Critical to the Indian Restaurant Experience

Data is deluging today’s enterprise organizations from ever-expanding sources and in ever-expanding formats. To gain insight from this valuable resource, organizations have been adopting Apache Hadoop with increasing momentum. Now, the most successful players in big data enterprise are no longer only utilizing Hadoop “core” (i.e., batch processing with MapReduce), but are moving toward analyzing and solving real-world problems using the broader set of tools in an enterprise data hub (often interactively) — including components such as Impala, Apache Spark, Apache Kafka, and Search. With this new focus on workload diversity comes an increased demand for developers who are well-versed in using a variety of components across the Hadoop ecosystem.

Due to the size and variety of the data we’re dealing with today, a single use case or tool — no matter how robust — can camouflage the full, game-changing potential of Hadoop in the enterprise. Rather, developing end-to-end applications that incorporate multiple tools from the Hadoop ecosystem, not just the Hadoop core, is the first step toward activating the disparate use cases and analytic capabilities of which an enterprise data hub is capable. Whereas MapReduce code primarily leverages Java skills, developers who want to work on full-scale big data engineering projects need to be able to work with multiple tools, often simultaneously. An authentic big data applications developer can ingest and transform data using Kite SDK, write SQL queries with Impala and Hive, and create an application GUI with Hue. (more…)

Remember last month, when the Kindle version of Off to Be the Wizard was on sale on Amazon, but only in the US? Well, now it’s the UK’s turn!

We can answer that question with the following headache-inducing shell command, which finds all words in a given list which use the same key a bunch of times in a row:

The winner, according to this script, is nonmonogamous, which requires you to type seven consecutive letters (nonmono) with the "6" key.[1]It's actually tied with nonmonotonic. These no doubt both lose to more obscure words which weren't in the wordlists I used.

It's rare for a word to have all its letters on the same key; the longest common ones are only a few letters.[2]Like "tutu". Nevertheless, using only these words, we can write a high def MMO on TV, a phrase whose words use only one number key each.

There are plenty of other phrases like this, although some of them are a bit of a stretch:

Typing issues like this aren't limited to old phone keyboards. For any text input system, you can find phrases which are weird to type.

It's a well-known piece of trivia among word geeks that "stewardesses" is the longest common word you can type on a QWERTY keyboard using only the left hand.

In fact, it's possible to write entire sentences with just the left hand. For example, try typing the words We reserved seats at a secret Starcraft fest. Weird, huh?

Let's take a look at a few more sentences—written with the help of some even messier shell commands and Python scripts[3]I constructed these sentences by searching text logs for sentence fragments that fit a particular constraint, then randomly connecting those groups together using a technique called Markov chaining. You can see the code I used here.—which follow various constraints:

And lastly, if anyone wants to know why you're not more active on social media, you only need the top row to explain that you're ... Special thanks to the facebook group for convincing me not to reject this one.

Volume One of Nine Planets Without Intelligent Life is now available.  You can get it here.

Volume Two is in the final stages of proofreading and should be out in a week or so.  Opplopolis Volume One will follow next month (don't want to bring everything out at once, you know.)

I'm pretty pleased with the way the books have turned out, and I hope you all are as well. I was a little worried that the panels I was forced to redo would stand out from the others, but this was not the case at all. And it actually feels pretty natural to read on the page. A pretty good product all together.

So, there you go. I'm going to be promoting this in an uncharacteristically aggressive way, so don't be surprised if you see it in other places. Keep checking in for updates on Volume Two and the Opplopolis book.

And don't forget that we have t-shirts as well. I've gotta make some more of those. How to Choose Where to Sit 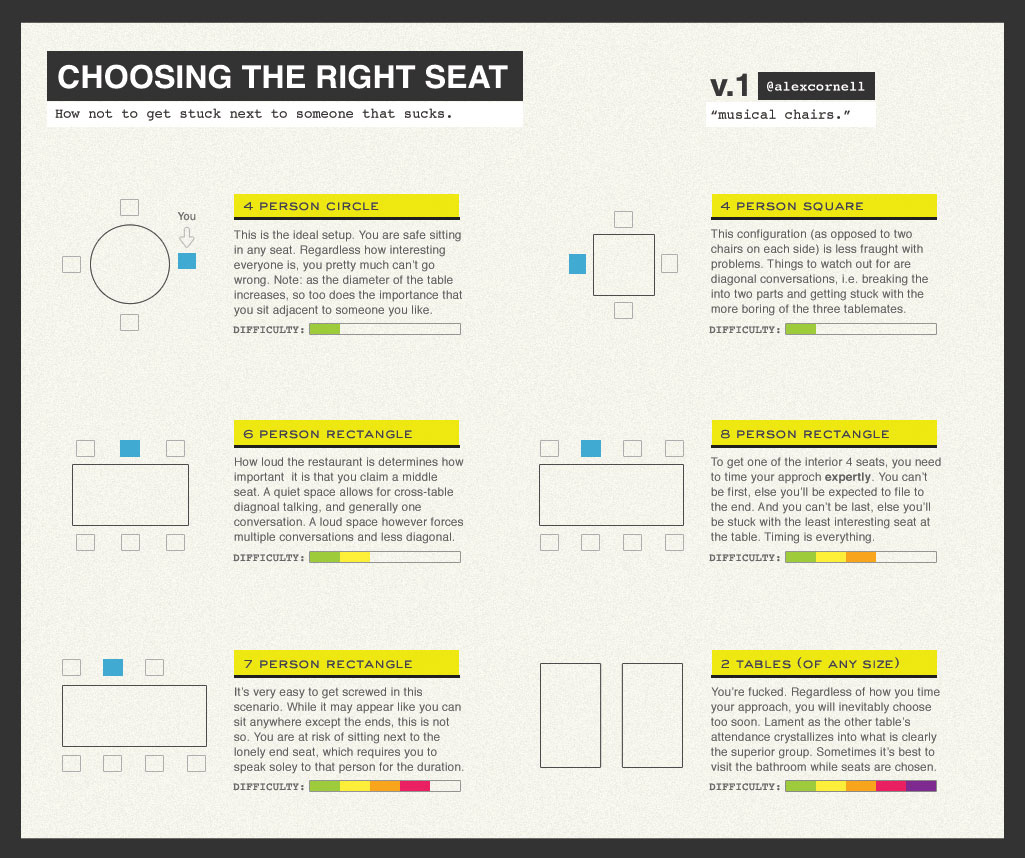 Designer Alex Cornell helps you figure out how to choose the best seat, or at least “how not to get stuck next to someone that sucks,” with this helpful infographic.

One of the most complex social situations you will encounter is the 45 seconds that elapse while deciding where to sit for dinner at a restaurant. Your choice should appear natural, unbiased and haphazard if executed properly. Timing is everything.

These 45 seconds determine how enjoyable your next 2 hours will be. Once the pieces start to fall into place and people take their seats, your choices narrow. People sit, seemingly at random, and if you don’t take the appropriate measures, you’re inevitably stuck at the least interesting end of the table. Daylightsavings, Tim.eagles.au and 51 others like this
No more posts. Check out what's trending.