My uncle has a great sense of humor by Cory Doctorow
After years of controversy, millions spent, and nothing to show for it, the French government has backtracked on HADOPI, the "three strikes" law that made it possible for entertainment companies to demand the termination of Internet accounts implicated in illegal downloading accusations. People whose routers are said to have been used for piracy may still face fines -- even if they can prove they didn't personally download anything illegally -- but no one will lose their Internet connection over piracy accusations in France: "the panel concluded that the three strikes mechanism had failed to benefit authorized services as promised."

Which Athlete Belongs on This Box? 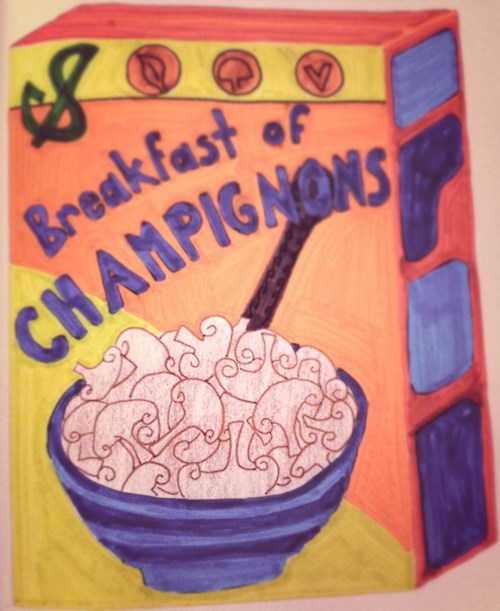 Submitted by: (via CONSCIOUSNESS IS AWESOME)

There were a lot of requests, so we made some Beard Facts shirts and other stuff.  Beard Facts comic here.

by Alex Chitu
Sometimes the same question can have multiple answers, even when you're looking for a simple fact. I've searched for [ny population] using Google and Bing and got two completely different answers. Google's answer is 8.245 million, while Bing's answer is 19,501,616. 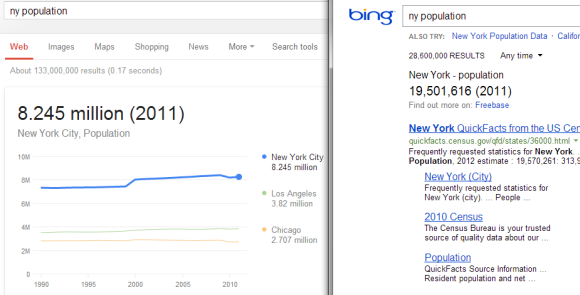 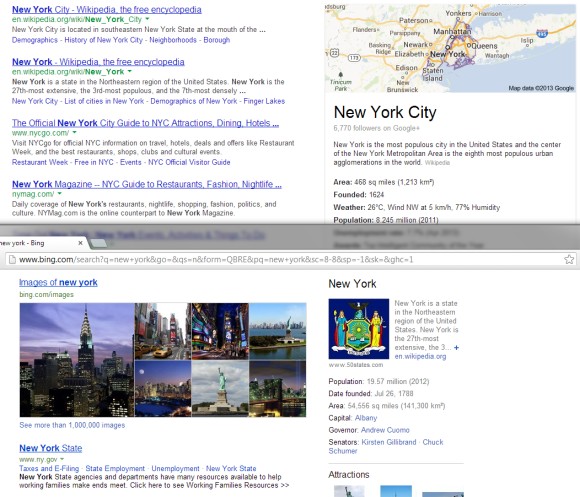 To disambiguate your query, you need to search for [ny city population] or [ny state population] and both search engines will return similar answers.

What if you search for [ronaldo age]? Here's what you get: 28 years (Google) and 36 years (Bing). Google mentions that the answer is for Cristiano Ronaldo, but Bing doesn't. 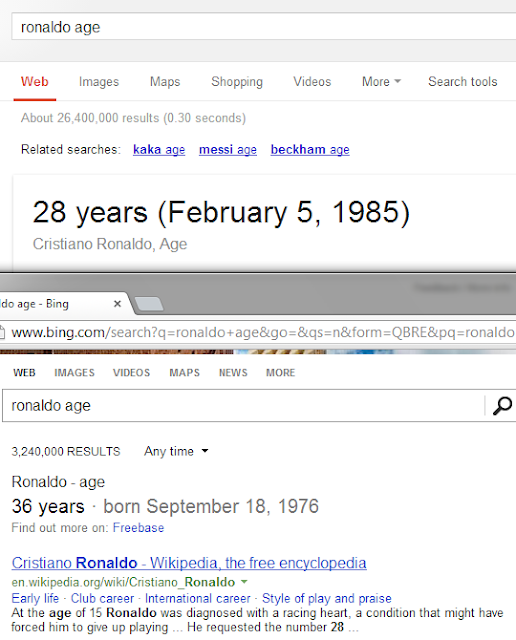 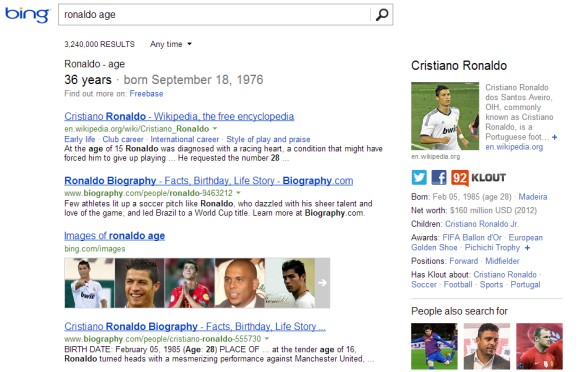 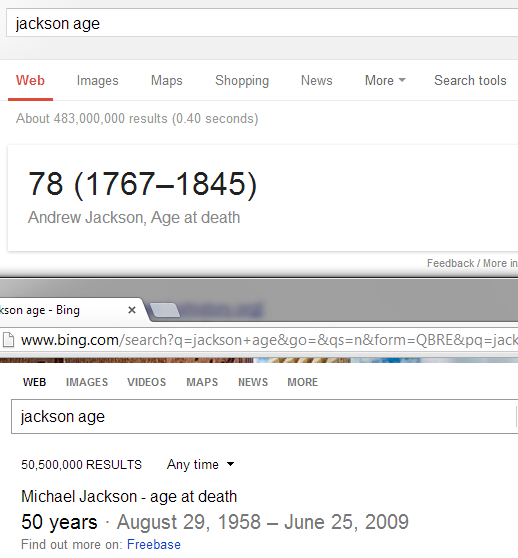 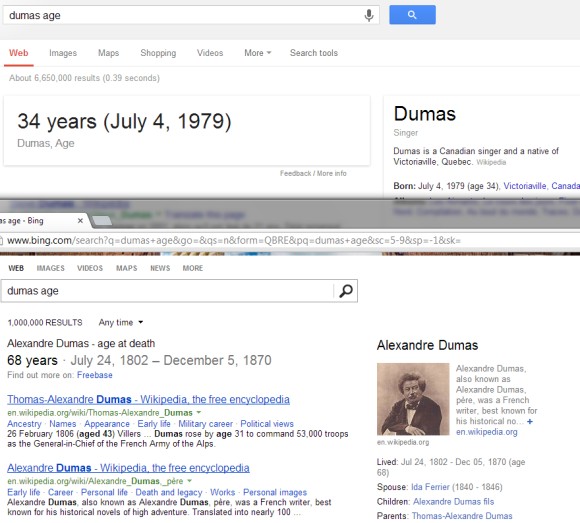 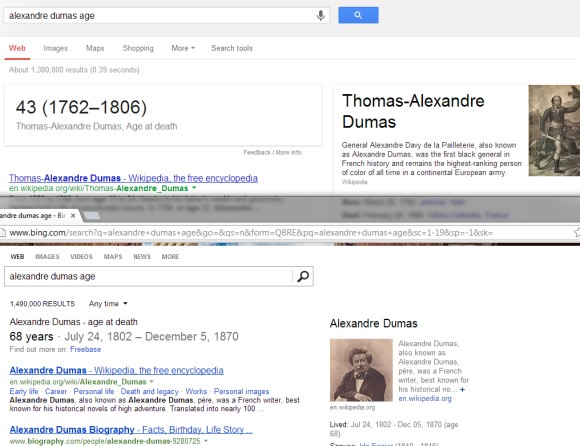 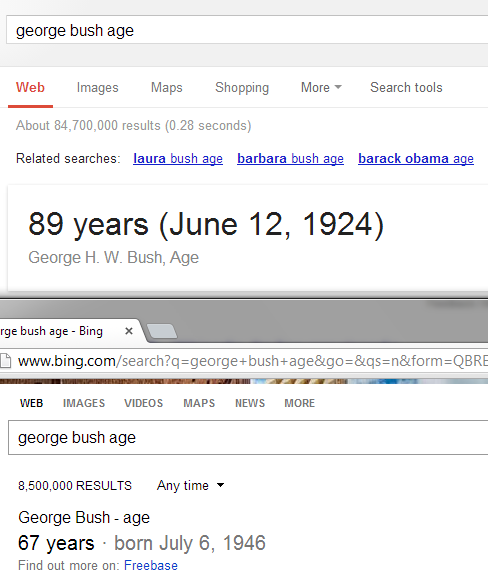 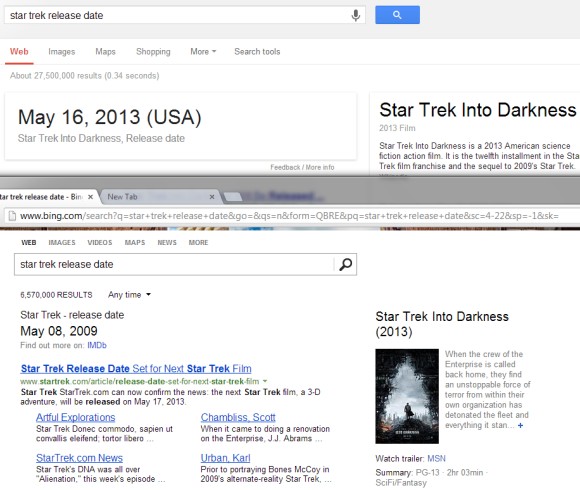 To sum up, it's a good idea to disambiguate your query and to check the answers provided by search engines.

by Rob Beschizza
"An Englishman who mysteriously vanished on holiday more than a decade ago has been reunited with his family after he was discovered allegedly working as a slave on a Welsh farm for the last 13 years." [NY Daily News] Jill sez, "Exciting study samples new books for sale by Amazon and asks: Why are there three times more books initially published in the 1850's than books from the 1950's? The chart on page 15 is eye-popping, showing graphically decade-by-decade how many more new books initially published before 1923 are currently available than those published after 1923 [the magic public domain date]. The music and YouTube data are also compelling!" The highs and lows of steak dinner With all these freeze frame posts, I give you the single best in joke that flashed for less than a second on BBC Comedy. If great scientists had logos... Someone at my work said their computer fan wasn't working. my fork overheated and became Italian

Sometimes it's the simple things that just make me smile. I did something a bit like this the other day.

Jeffrey sez, "A fascinating article about what causes traffic jams, and how to drive differently to help ease 'stop and go' traffic. It is interesting to see how basic human instincts (or maybe just the way we have been taught how to drive) can turn a crowded road into one that is jammed with stop and go traffic. It is probable that self-driving cars will eliminate many of these issues before many humans have time to learn these techniques. However, it is very encouraging to hear the author's anecdote about how he was able to singlehandedly erase a traffic jam in his own lane:"

On a day when I immediately started hitting the usual "waves" of stopped traffic, I decided to drive slow. Rather than repeatedly rushing ahead with everyone else, only to come to a halt, I decided to try to drive at the average speed of the traffic. I let a huge gap open up ahead of me, and timed things so I was arriving at the next "stop-wave" just as the last red brake lights were turning off ahead of me. It certainly felt weird to have that huge empty space ahead of me, but I knew I was driving no slower than anyone else. Sometimes I hit it just right and never had to touch the brakes at all, but sometimes I was too fast or slow. There were many "waves" that evening, and this gave me many opportunities to improve my skill as I drove along.

I kept this up for maybe half an hour while approaching the city. Finally I happened to glance at my rearview mirror. There was an interesting sight.

It was dusk, the headlights were on, and I was going down a long hill to the bridges. I had a view of miles of highway behind me. In the other lane I could see maybe five of the traffic stop-waves. But in the lane behind me, for miles, TOTALLY UNIFORM DISTRIBUTION. I hadn't realized it, but by driving at the average speed, my car had been "eating" traffic waves. Everyone ahead of me was caught in the stop/go cycle, while everyone behind me was forced to go at a nice smooth 35MPH or so.

The Physics Behind Traffic Jams

When it comes to great light painting photography, we’ve had cause to mention Darren Pearson on more than one occasion. His dinosaur light paintings were well-received, and his skeleton skater light painting animation was just plain cool.

So rather than continuing to pull bits and pieces of Pearson’s work to show you every time something catches our eye, we’ve decided to introduce you to him and his work as a whole, and let the light painting enthusiasts among you follow to your heart’s content.

As he put it while speaking with Thrash Lab (below), the air is his canvas. His work consists of dinosaurs, skateboarders, skeletons and animals he draws with his lights. Based out of San Diego, he’s also put together a series of images dubbed California Soul — a sort of ode to California culture.

Here’s that Thrash Lab profile mentioned above. Fair warning: he does use a little bit of inappropriate language:

Visiting his Flickr account or website is the best way to see everything. His light paintings are split up into sets, with subjects ranging from fossils, to spirit animals, aliens, angels and daemons. Below you’ll find a selection of some of our favorites:

Although his work is whimsical and fun to look at, don’t make the mistake of thinking it’s also easy to create. It takes skill to transfer the image in his mind onto that canvas of air he mentioned, and more often than not, it also takes a lot of trial and error:

I won’t stop until I get what I’m looking for. I may do something a hundred times, because I have a vision that I kind of go into something thinking ‘ok, I’ll get this particular shot,’ and if I don’t get that particular shot, I’ll obsess over it.

To see a lot more of Pearson’s work with light (as well as a few sets that have nothing to do with light painting) check out his Flickr profile or head over to his website Darius Twin by clicking here.

Image credits: Photographs by Darren Pearson and used with permission.

If this doesn’t make you excited about science, get outta ma face. Bubblenomics: how the Beanie Babies speculators got it wrong How Much Beanie Babies Were Predicted To Be Worth Vs. How Much They’re Really Worth (via Digg)

I went to the Prado this morning. I was last in Madrid over 25 years ago and enjoyed it then, so I went again. It contains two of my favourite paintings: Bosch's Garden of Earthly Delights and Goya's Saturn Eating his Children. The Prado is heavy on portraiture, which if it's good always makes me feel melancholy: if I get the sense that the person in the portrait looks alive, with a personality, then I invariably feel a sense of loss that they're long dead. The large nunber of Velazquez canvases certainly had that effect (except for the ones of the Hapsburgs, who are so inbred as not to look real), but there were Titians, Coelloes, Van der Weydens and Lopezes that did it too, plus the occasional Goya where he wasn't trying to flatter his subject, and some one-offs by Botticelli, Tintoretto, Van Dyck and Anguissola.

The last time I was in Madrid, we went to an annexe of the Prado which was showing Guernica. When we left, I saw this absolutely stunning full-length portrait of a woman but my wife wanted to leave so I couldn't go back and find out who it was by or of. I was hoping to see it again today, but I didn't. I can see it clearly in my mind, and it strikes me as being in the style of Raimundo de Madrazo (who had some brilliant portraits on display). I'm no closer to identifying it, though.

Do not go to Madrid Airport expecting to pick up some last-minute gifts to take home. The shopping here is rubbish...
23 Jun 10:08

Microsoft pays '£64,000 or more' to get devs coding for Windows Phone

Microsoft is paying developers up to $100,000 (£64) to get their applications over to the Windows Phone 8 platform, according to a  report from Bloomberg Businessweek. This is in addition to a promotion the company is running where it will pay any developer to get their app into the Windows Store ASAP in an effort to catch up to the iOS and Android app stores.

Wiped Nutella on the edges...

What my 13 year old brother REALLY needs to understand.