(937): look im sitting on my bathroom floor in my underwear snorting cocaine can we talk about this later. Internet Tolls And The Case For Strong Net Neutrality

by Reed Hastings
The Internet is improving lives everywhere – democratizing access to ideas, services and goods. To ensure the Internet remains humanity's most important platform for progress, net neutrality must be defended and strengthened.

The essence of net neutrality is that ISPs such as AT&T and Comcast don't restrict, influence or otherwise meddle with the choices consumers make. The traditional form of net neutrality which was recently overturned by a Verizon lawsuit is important, but insufficient.

This weak net neutrality isn't enough to protect an open, competitive Internet; a stronger form of net neutrality is required. Strong net neutrality additionally prevents ISPs from charging a toll for interconnection to services like Netflix, YouTube, or Skype, or intermediaries such as Cogent, Akamai or Level 3, to deliver the services and data requested by ISP residential subscribers. Instead, they must provide sufficient access to their network without charge. 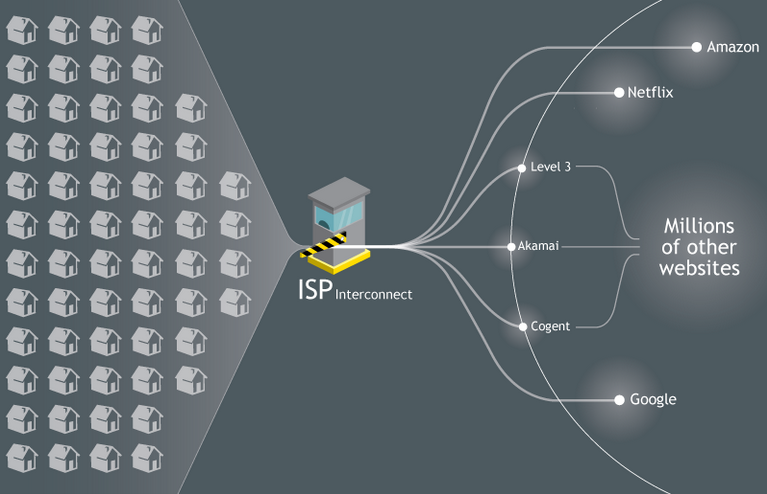 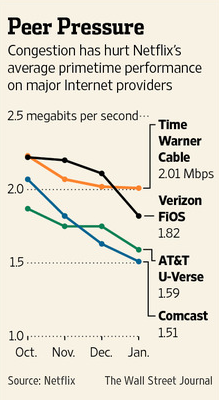 Some major ISPs, like Cablevision, already practice strong net neutrality and for their broadband subscribers, the quality of Netflix and other streaming services is outstanding. But on other big ISPs, due to a lack of sufficient interconnectivity, Netflix performance has been constrained, subjecting consumers who pay a lot of money for high-speed Internet to high buffering rates, long wait times and poor video quality. A recent Wall Street Journal article chronicled this degradation using our public data.

Once Netflix agrees to pay the ISP interconnection fees, however, sufficient capacity is made available and high quality service for consumers is restored. If this kind of leverage is effective against Netflix, which is pretty large, imagine the plight of smaller services today and in the future. Roughly the same arbitrary tax is demanded from the intermediaries such as Cogent and Level 3, who supply millions of websites with connectivity, leading to a poor consumer experience.

Without strong net neutrality, big ISPs can demand potentially escalating fees for the interconnection required to deliver high quality service. The big ISPs can make these demands -- driving up costs and prices for everyone else -- because of their market position. For any given U.S. household, there is often only one or two choices for getting high-speed Internet* access and that’s unlikely to change. Furthermore, Internet access is often bundled with other services making it challenging to switch ISPs. It is this lack of consumer choice that leads to the need for strong net neutrality.

Netflix believes strong net neutrality is critical, but in the near term we will in cases pay the toll to the powerful ISPs to protect our consumer experience. When we do so, we don’t pay for priority access against competitors, just for interconnection. A few weeks ago, we agreed to pay Comcast and our members are now getting a good experience again. Comcast has been an industry leader in supporting weak net neutrality, and we hope they’ll support strong net neutrality as well.

ISPs sometimes point to data showing that Netflix members account for about 30% of peak residential Internet traffic, so the ISPs want us to share in their costs. But they don't also offer for Netflix or similar services to share in the ISPs revenue, so cost-sharing makes no sense. When an ISP sells a consumer a 10 or 50 megabits-per-second Internet package, the consumer should get that rate, no matter where the data is coming from.

Some ISPs say that Netflix is unilaterally "dumping as much volume" (Verizon CFO) as it wants onto their networks. Netflix isn't "dumping" data; it's satisfying requests made by ISP customers who pay a lot of money for high speed Internet. Netflix doesn't send data unless members request a movie or TV show.

Interestingly, there is one special case where no-fee interconnection is embraced by the big ISPs -- when they are connecting among themselves. They argue this is because roughly the same amount of data comes and goes between their networks. But when we ask them if we too would qualify for no-fee interconnect if we changed our service to upload as much data as we download** -- thus filling their upstream networks and nearly doubling our total traffic -- there is an uncomfortable silence. That's because the ISP argument isn't sensible. Big ISPs aren't paying money to services like online backup that generate more upstream than downstream traffic. Data direction, in other words, has nothing to do with costs.

Some big ISPs are extracting a toll because they can -- they effectively control access to millions of consumers and are willing to sacrifice the interests of their own customers to press Netflix and others to pay. Though they have the scale and power to do this, they should realize it is in their long term interest to back strong net neutrality. While in the short term Netflix will in cases reluctantly pay large ISPs to ensure a high quality member experience, we will continue to fight for the Internet the world needs and deserves.

*Defined as 10 Mbits/sec -- sufficient for a good Skype video, an MLB.tv live game or high quality Netflix streaming. DSL and mobile do not generally offer these speeds.
**in other words, moving to peer-to-peer content delivery
No more posts. Check out what's trending.