I worked with one of my students, starting from his 6th grade, through high school and college, and up to graduate school.
Lifelong readers tend to do best in critical reading sections. He is now helping me blog on https://domywriting.com/. Because of this, it is sometimes difficult to help students improve their critical grades in a matter of weeks. After all, you cannot teach a student to read 100 books in two weeks!

It’s been just over five years since Google shut down the Google Reader. I was surprised to see a lot of people are still bitter with them about it, even though *ahem* independent alternatives continue to exist and thrive.

I get it though. I was one of the millions of people who got my news from Google Reader. But it was infuriating to watch them kill a useful tool and then invest billions in magic glasses, killer drones, and self-driving cars.

So while it’s okay to be bitter, I think most of us probably realize we’re all better off with them gone. RSS took a serious hit that day, and use remains down. But in many ways, RSS is in a healthier and more sustainable position.

It’s now clear that the demise of the Google Reader was first really loud warning that you can’t rely on a publicly traded, profit-driven Silicon Valley tech company to deliver content. There is no way that story ends well. They will feed you sponsored crap, undermine your democracy, or pull the rug out from under your feet entirely.

I’m not going to pretend life is necessarily easier with Google gone from the game. The problem is that the tech giants are successful because they make things so easy. I know that RSS may never have as many users as it once did when Google was invested in it.

When Google got out of the RSS game, those of us who remained realized that yes, we can survive without them. Five years later, RSS is still the best, most unfiltered way to get content you want. There’s a greater diversity of choices and no one company dominates everything. So let’s stop hoping Facebook or Twitter or someone else will do our job for us. Let’s stop waiting for someone to tell us what we want to read. Let’s stop publishing what they want us to publish. We can do better without them.

It’s Getting Dark This Halloween

Halloween is the one holiday that’s best celebrated in the dark. Which is why The Old Reader is excited to be able to introduce the all-new Dark Mode. It’s time to embrace the dark side of reading on the web.

Okay, Dark Mode really has nothing to do with Halloween, but this seems like the perfect time to introduce it to everyone. It is all about readability, reducing eye strain, and making your experience using The Old Reader better.

Dark Mode was one of the most commonly requested features we’ve had from our users and there is even a user-created plugin that does a similar thing. With this new, built-in feature, all you have to do to use it is hit the “d” key while using The Old Reader, and voilà, you’re in Dark Mode.

Dark Mode is just one small way we want to keep The Old Reader moving forward. Give it a try, we think you’ll really like it. Thanks again for all the great feedback and happy darkmoding!

Drew Stewart got the call at around 2am: They broke the universe again, you should check it out.

So Stewart did something he's done countless times before; he has no idea how many. He turned on Star Wars. But this time was different—literally. The galaxy had changed, like a glitch in the Matrix (if you'll allow a mixed cinematic metaphor). And it wasn't the first time.

As the person behind a Twitter account called Star Wars Visual Comparison, Stewart is a kind of unofficial keeper of apocrypha, of the sometimes subtle, sometimes extraordinary changes wrought by their makers upon three Star Wars movies: A New Hope, The Empire Strikes Back, and The Return of the Jedi. These alterations to the canon are the stuff of many nerd debates, and Stewart has followed them closely. That's why, at 2:50am on the day Disney+ launched with the whole Star Wars catalog in 4K resolution (pretty!), he found himself watching A New Hope yet again. What he found was yet another wrinkle: an all-new, all-different shoot-out between Han Solo and the lizardish bounty hunter Greedo. 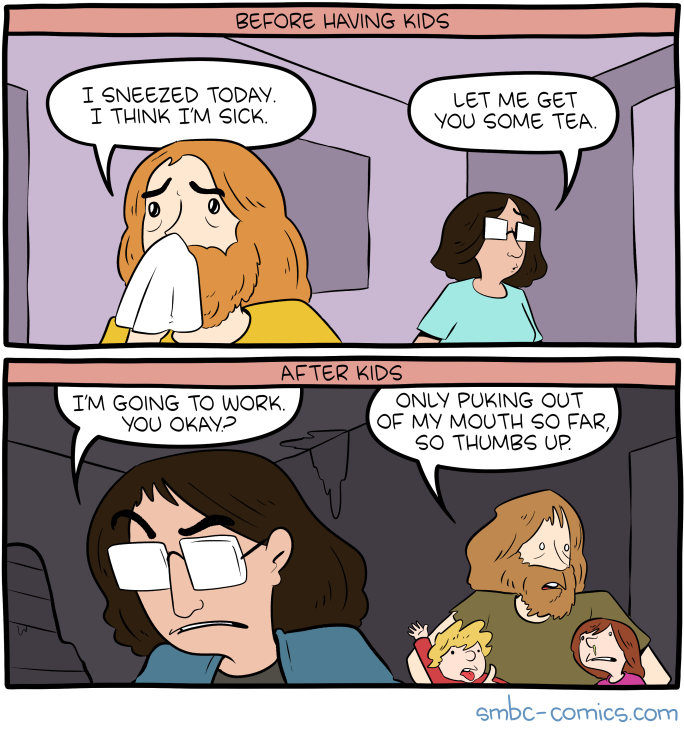 Hovertext:
I can still see out of one eye and hop on my good leg, which is pretty much what I've always ben like.

Wired had a great post about the “slow web” or Artisanal Internet. The idea is to embrace independent, decentralized technology, the way the slow food movement embraces locally produced, traditionally-prepared foods. It’s an interesting idea but I’m guessing not one most people are ready to embrace. Heck, I wasn’t even sure it would be 100% my jam.

My biggest concern is that in this analogy, Facebook is McDonald’s, and, like McDonald’s, is probably never going away. Both are unhealthy and addictive, and very hard for most people to quit. I’ve been off Facebook for about 5 years now and left Instagram maybe 2 years ago (although I didn’t shut down my account). But most of my friends still use both of those platforms. (And I do mean my real friends — I have no idea what the randos I barely knew in high school are up to now that I’ve left.)

Big Internet keeps coming up with new ways to hook us. My kids have started to use Snapchat and one of them got backdoor-trapped into the social network known as Fortnite. Policing these really does seem a lot like policing my kids’ diet. We’ve taken the moderation and education approach for the most part and it seems to be working. But then I suppose they’ll just have their whole lives to battle how much they use social applications — like we’ve all had to manage how much Ben and Jerry’s is acceptable.

The good news is that there are plenty of artisanal web apps out there. I like think The Old Reader is one. That is, apps that help you learn, connect, or get things done without spying on you or manipulating what you see for their profit. But start calling them Artisanal Web Apps at your own risk… I have a feeling you might get slapped in the face if too many people hear you talking like that.

Just like farmer’s markets haven’t wiped out fast food, the slow web is probably never going to take down Facebook or displace Google. The issue is that there is no alternative to an advertising-driven business model that really works. But if developers can learn to live without venture capitalists, without trying to grow exponentially, and offer a safer, less polluted Internet, we can get along just fine.

Brazen, li2000 and 52 others like this
No more posts. Check out what's trending.