Automakers likely sold fewer than 1.5 million new vehicles in the United States in June 2017, a modest decrease of around 2 percent compared with June 2016. While auto sales remain high by historic standards — 1.48 million sales would still make June 2017 more than 15-percent better than the 1.33 million June average from 2011-2015 […]

The post June 2017 U.S. Auto Sales Likely Slid for a Sixth Consecutive Month As Incentives and Transaction Prices Rise appeared first on The Truth About Cars.

The Philadelphia 76ers fan who gave angry double birds to Russell Westbrook on Wednesday has apologized for his actions while suggesting he was provoked by the Oklahoma City guard.

Richard Harkaway, a practicing urologist who moonlights as a comedian, became an internet sensation after showing both of his middle fingers to Westbrook. He was escorted from his seat by security and roasted by ESPN’s Jeff Gundy on the television broadcast.

“As a part-time comedian I realize that my words and actions are sometimes inappropriate,” Harkaway said in a statement to Philly.com issued by a personal representative. “In this instance, after standing up to boo and being provoked by Russell Westbrook calling attention to my being overweight, my action in response was clearly inexcusable and I am embarrassed.  I sincerely apologize to my fellow Sixers fans, the Sixers organization, my colleagues and patients, and to Mr. Westbrook for my behavior.”

Give credit to Harkaway for accepting responsibility but his statement is definitely the first thing we’ve ever read containing the phrase “as a part-time comedian.” It’s truly an attention-grabber perfect for best man speeches or awards banquets.

While we haven’t had the privilege of catching any of Harkaway’s sets, it’s being reported that he routinely makes light of his weight.

A nation won’t be satisfied until we get the isolated audio of Westbrook yelling at the crowd. This is a scandal that deserves all of our attention until we learn what really happened.

This newspaper headline is… something 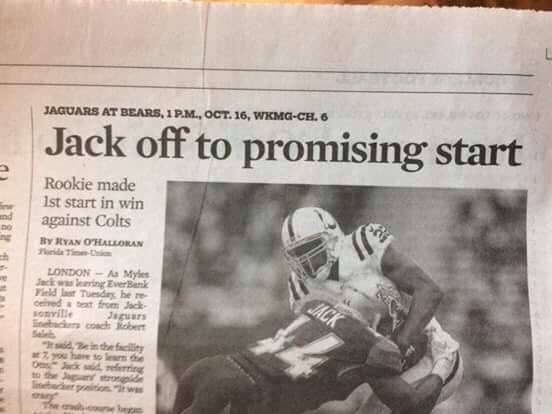 Newspaper editors have hard jobs. They often log long, late hours, reading thousands of words a day, and their work gets seen and criticized by thousands of people.

So let’s cut some slack to the poor Florida Times-Union editor who wrote this headline on a story about Jacksonville Jaguars linebacker Myles Jack.

See, if you don't get the print edition, you miss jewels like this. (Good luck on strong finish.) pic.twitter.com/SnVIFLyiwI

Before internet, this headline would have drawn snickers from a few people in Jacksonville, who would have then been embarrassed at their own immaturity and moved on to the next thing.

If you’re wondering, the online version of the Times-Tribune story currently bears the headline, “Myles Jack makes most of first NFL start.”

No matter what else happened to you today, always remember October 6, 2016 as the day a newspaper headline was described as “masturbatory.”

Here’s to you, weary newspaper editor. Get a good night’s sleep tonight.

The post This newspaper headline is… something appeared first on Awful Announcing.

Which true freshmen are still on track for a redshirt after week two? 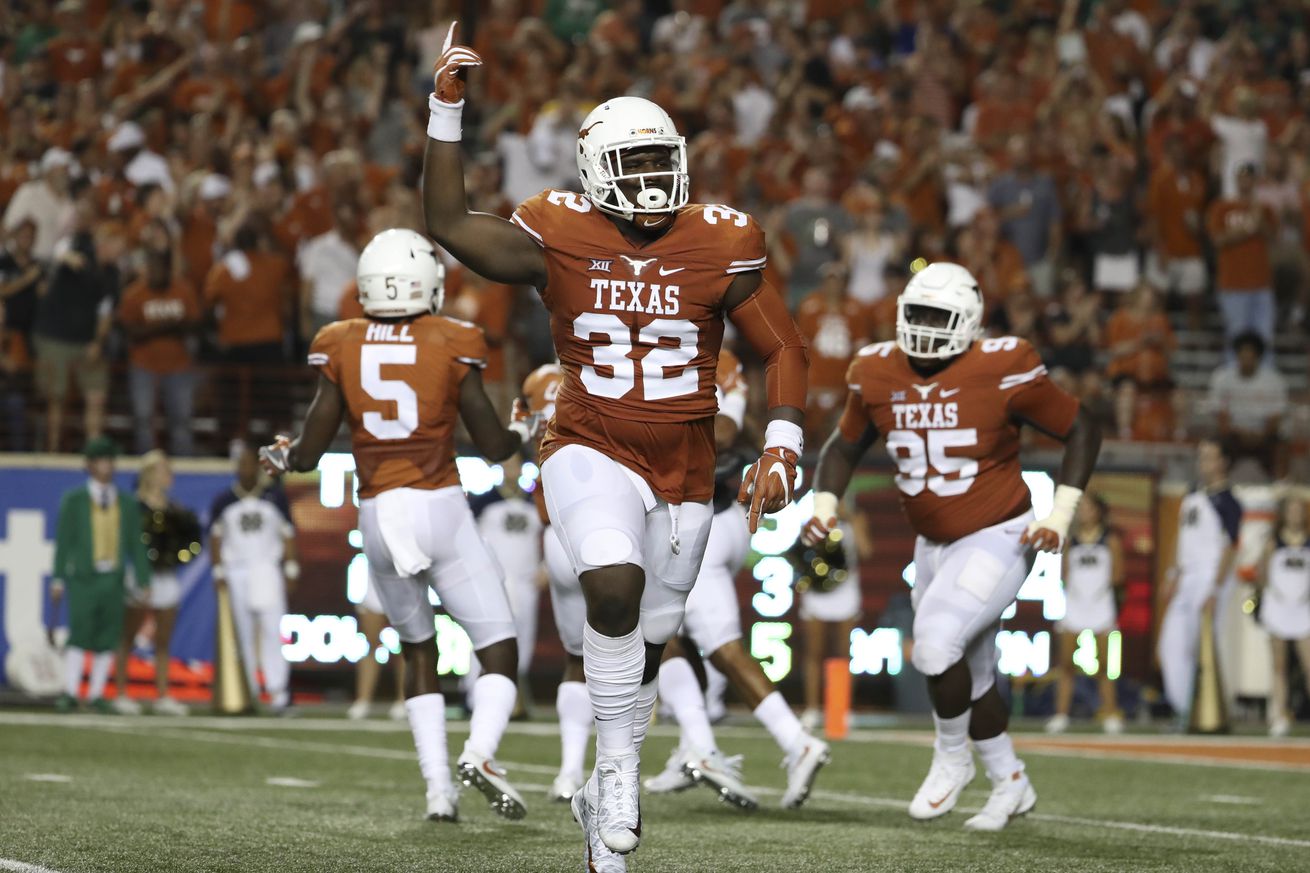 We saw a few more freshmen hit the field this week.

Partly due to injuries across the depth chart, we saw a few more true freshmen get on to the field this week against UTEP.

(If they have recorded stats, I’ve listed those next to their names as well)

Week two, we saw the four freshmen that were on the depth chart but didn’t play against Notre Dame (Humphrey, Delance, Okafor, and Christmas) get in the game against UTEP.

There was still no sign of DE/OLB Erick Fowler this week. And we haven’t really heard much on that front in general. So at this point, we probably could expect a redshirt unless something changes sooner than later.

By this point, I would have thought both Devin Duvernay and Collin Johnson would have been bigger factors on offense. But Jerrod Heard moving to receiver has seemingly taken snaps away from Duvernay. And in some regards, I see Jacorey Warrick and Jake Oliver as two guys taking snaps away from Johnson and Humphrey (we could even throw in Dorian Leonard into that mix as well - he scored a long 46-yard touchdown against UTEP).

Maybe we’ll see the freshmen wide outs get in there more as the season progresses. So far, Texas has been just fine with using its older players though. Depth is deep at wide receiver, as we all know by now.

As for the defense, Malcolm Roach will be a name to watch as a pass-rusher on the outside. He’s been holding his own and the position needs him for depth too. But in general, the freshmen on defense are being utilized as key reserves and depth.

We’ll check back in on this report next week after the Cal game.

Video: When a Bugatti Veyron drag races against a Koenigsegg Agera S Hundra, we all win

Want to watch two of the fastest production automobiles in the world line up on an open runway to race? Want to see it happen a whole bunch of times?

We thought so. Featuring the well-known Bugatti Veyron in one lane and the less-well-known but just as impressive Koenigsegg Agera S Hundra - which is powered by the same 1,040-horsepower twin-turbo 5.0-liter V8 engine as other Agera S models, but with some extra lightweight bits along with lots and lots of gold - in the other, you can rest assured that the video down below is full of carbon fiber, booming exhaust notes, turbo whine and asinine acceleration. And, though we won't spoil the results, we think it may be full of surprising victories for those who don't keep tabs on such important figures as power-to-weight ratios and the like...

Now for the disclaimers. Are both drivers aware of how to extract maximum performance from their machines? Are they both in perfect states of tune? Would the result be different from a standing start? Was the fact that the video was shot at Koenigsegg's home track a display of favoritism? Was there a full moon the night before? We have no idea. That said, watching well over 2,000 horsepower line up for a race is nearly always worth watching. So, without further ado, we present the video below.

Continue reading When a Bugatti Veyron drag races against a Koenigsegg Agera S Hundra, we all win

When a Bugatti Veyron drag races against a Koenigsegg Agera S Hundra, we all win originally appeared on Autoblog on Mon, 03 Jun 2013 19:15:00 EST. Please see our terms for use of feeds.