Dinner Party Details: Hang a Roll of Butcher Paper To Use For All Your Menus! — Entertaining Inspiration

As you may remember from my dinner party last spring, I like to share the evening's menu with my guests. To do this, I've been tearing off an individual sheet from a roll of brown packing paper and hanging it on a blank stretch of wall. But then I saw this photo, and I thought it was absolutely brilliant:

Because I add spinach to everything. I keep frozen spinach on hand so I can toss a handful into whatever I’m cooking and spinach felt like such a natural addition to my usual grilled cheese. I also added a little feta cheese for a tangy punch, a few spicy flakes of red pepper, and toasted it up on some good bread. The result was something truly spectacular. This Spinach Feta Grilled Cheese only takes a few minutes more than regular grilled cheese, and it’s SO worth the extra effort. No joke, you’ll pay about $8 for something like this at your local cafe, but not at home!

Is This a Melt or a Grilled Cheese?

What Kind of Bread is Best for Grilled Cheese

I originally used ciabatta bread for this recipe, but it wasn’t available this time around so I chose a nice sourdough bread instead. Homemade focaccia would also be nice. Because the ingredients in this recipe are a little more hearty than your everyday grilled cheese sandwich, I would suggest using any sturdy bread that can hold up to the filling ingredients. Skip the soft white bread for this one. ;)

What Kind of Spinach to Use

I used frozen spinach for this recipe because it’s easy to keep on hand without worrying about it spoiling, but you could absolutely use fresh spinach if you have it. Just sauté it down until most of the moisture is gone, just as I did below with the frozen spinach.

As far as frozen spinach goes, you’ll want to buy the kind that comes loose in a bag rather than the type that is frozen into a block. That will allow you to thaw just enough for this recipe while leaving the rest in the freezer for your next cooking adventure.

What to Serve with Spinach and Feta Grilled Cheese

As with any grilled cheese sandwich, this spinach and feta version goes great with a cup of tomato soup. But you could also serve it with a little dish of pasta sauce or pizza sauce for dipping!

What Else Can I Add?

Oh, there are so many delicious possibilities for add-ins here: olives, artichokes, red onion, parmesan cheese… I’d not be against putting an egg on there, too. ;) 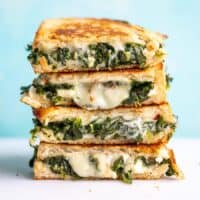 Add a 1/2 tablespoon of olive oil and one minced clove of garlic to a small skillet. Cook the garlic for about a minute, then add ¼ lb. frozen spinach (you can just estimate ¼ of a one pound bag, or ⅓ of a 12oz. bag). Season with a pinch of salt and pepper and continue to sauté over medium until most of the moisture has evaporated.

Spread about ½ Tbsp butter over one side of each slice of bread (four slices).

Flip the bread over so the unbuttered sides are facing up. Add about ¼ cup shredded mozzarella to two of the slices. Top each with a little crumbled feta.

Add the cooked spinach on top of the mozzarella and feta.

Add another ¼ cup shredded mozzarella to each along with a pinch of crushedred pepper. Top with the second piece of bread, butter side facing out.

Heat a large skillet over medium-low. Once hot, add the sandwiches. Cook for about five minutes on each side, or until golden brown and crispy on the outside and melty and hot on the inside.

Slice the sandwiches in half and serve!

Learning to Love Foods You Hate: A How-to Guide for Frugal Eaters

by noreply@blogger.com (Kris)
This article first appeared in April 2009.
Up until a few years ago, the list of foods I loathed was a long one. It included, but wasn’t limited to: spaghetti squash, broccoli, asparagus, red cabbage, ginger ale, cauliflower, radishes, lentils, beans, Brussels sprouts, fennel, eggplant, anise, scallops, figs, and of course, the dreaded mayonnaise. The list goes on (and on), but you get the idea: growing up, I wasn’t exactly a daring eater. 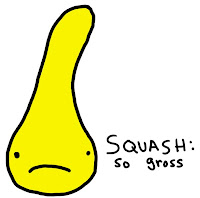 I still hate mayo. I will ALWAYS hate mayo. George Clooney could serve me mayo wrapped in chocolate bacon on a gold-plated re-issue of Who’s Next, and I would throw it back in his face. But my opinion’s changed on most of those other foods. These days, I’ll gladly scarf a floret of cauliflower. Brussels sprouts hold a special place on my dinner table. And eggplant? Well, eggplant is my favorite thing ever, aside from the panda song from Sifl and Olly. (In fact, you could say I’m drunk on eggplant mystery.)

Granted, part of it is just me aging. At 31-years-old, my palate’s matured a little, and my tastes now lean more toward savory than sweet. The other part, though, can be directly attributed to recent changes in my lifestyle.

See, a few years ago, I resolved to learn to cook, to eat healthier, and to better manage my money. As it turned out, vegetables and legumes were vital to making this work, since they’re exponentially cheaper than meat and much more nutritious than most starches. So, I had to confront my fears. I had to expand my produce repertoire beyond corn, carrots, corn, and carrots.

These strategies helped. I learned to tolerate, and even love, a lot of foods I had longstanding issues with. Try ‘em for yourself, and please add your own suggestions to the comment section.

Make it unrecognizable.
Case study: Eggplant
Seedy, mushy, and horrifically purple, eggplant appealed to me about as much as a drug-free colonoscopy. Then, in 1997, my friend H hid it in her homemade tomato sauce. And … revelation. Soon, I was on to eggplant dips, eggplant pastas, and finally, plain ol’ broiled eggplant. The trick was getting the image of the vegetable out of my head, and forcing me to associate it with otherwise good food. I suspect it would work beautifully with any vegetable that could be pureed or furtively included in a sauce (butternut squash, bell peppers, etc.).

Use it in a recipe with foods you love.
Case study: Brussels sprouts
As far as I was concerned, Brussels sprouts were tiny, bitter cabbages that masochists ate when they ran out of bigger bitter cabbages. Little did I know that slathering them in Parmesan would provide a delicious gateway into healthier, simpler preparations. See also: Red Cabbage (ew) with Honey (nice), Apples (yay!), and Bacon (king of cured meats). It's actually quite scrumptious. 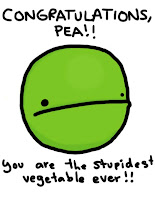 Try it in an ethnic dish.
Case study: Broccoli
Broccoli: looks like trees, tastes like butt, right? Yeah, I used to think like that, too. But in high school, Ma ordered Chicken and Broccoli from our local Chinese joint, Da How. Suddenly, it was broccoli: looks like trees, tastes like HEAVEN (with garlic and brown sauce). Sometimes, a food is more appealing when its paired with flavors you’re not necessarily accustomed to. Like bean sprouts on top of Pad Thai. Or peas stuffed in a samosa. Or tomatillo sauce spread across an enchilada. Pick a cuisine and start experimenting.

Cook the best-reviewed recipe you can find featuring that food.
Case study: Cauliflower
Most aggregate recipe sites like Epicurious, Food Network, and All Recipes have sophisticated rating systems with which home cooks can evaluate any dish. If you’re feeling ambitious, plug an ingredient into one of their search engines. Then, prep the recipe with the best overall reviews. For example, Ina Garten has a Cauliflower Gratin that’s received an average of five stars from 132 people (which is outstanding). I’ve tried it myself, and without exaggeration, it changed the way I felt about cauliflower. I just … I just didn’t know it could taste that good. Now, stuff like Roasted Garlic Cauliflower and Curried Cauliflower Soup with Honey are making regular appearances in my mouth.

Understand you don’t have to eat it the way your Ma (or Pa) prepared it.
Case study: Spaghetti Squash
Across the country, millions of Irish-Americans loathe vegetables because growing up, produce was boiled beyond recognition and then forced by threat of death into their reluctant maws. But take heart, my freckled brethren! It doesn’t have to be this way. Did you know carrots can be roasted? And broccoli rabe, sauteed? And spaghetti squash, combined with red sauce, mozzarella, and pine nuts to create something COMPLETELY DELICIOUS? It’s true. So, love your Gaelic Ma. Embrace her. Call her often. Just … try to forget her cooking. It’ll make this whole process much easier.

Try a dish with a subtler incarnation of that food.
Case study: Tarragon
This one’s a little difficult to explain, so here’s an example: I despise anise. Even thinking about its black licorice flavor makes my tongue curl. Recently though, I discovered a White Bean and Tarragon Soup that I quite like. Tarragon, like fennel, possesses traits similar to anise, but it’s much, much subtler. In the soup, it was complemented so well by the other ingredients, I didn’t even taste the hate. Maybe I'll feel the same way about anise someday. Think of this principle like salsa: you start out mild, and work your way up to medium and hot varieties. 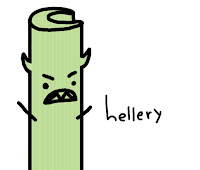 Give it just one more shot.
Case study: Beans
For some inexplicable reason, I always assumed I hated beans. As a kid, they looked funny to me. And in my six-year-old brain, funny-looking food = bad food. It wasn’t until I grew up, sacked up, ate one and didn’t throw up, that they became a regular part of my diet. (Okay, hummus helped.)

If you truly hate it, let it go.
Case studies: scallops, figs, radishes, mayo
Scallops will never be my thing, no matter how fresh they are, how well they’ve been prepared, and how many times I try them. Figs, radishes, mayonnaise – still disgusting, as well. (Which, did I mention I hate mayonnaise? I did? Oh, good.) Sometimes, a certain food just won’t do it for you. And it’s okay. Just move on to the next one.

And that’s it. Readers? Suggestions?

If you like this article, you might also dig
(All images courtesy of NatalieDee.com. Go there now.)
Betnyjean likes this
No more posts. Check out what's trending.