Bio-IT World News | NASA has released a statement saying that the first DNA sequencing in space has occurred on the International Space Station.

Company pursues breakthrough medicines with proteins unlike any seen in nature.
01 Sep 05:42

How DNA Could Store All the World’s Data

Nature News & Comment | Modern archiving technology cannot keep up with the growing tsunami of bits. But nature may hold an answer to that problem already.
11 Aug 19:56

Beyond CRISPR: A Guide to the Many Other Ways to Edit a Genome

Nature News | The surge of activity in recent years around CRISPR-Cas9 gene editing has also led to a flurry of modified CRISPR systems, or new systems entirely, which are starting to solve problems like delivering enzymes into cells, making specific changes to the DNA sequence, and editing RNA as well as DNA.

by Darknet
So there’s been a lot of news lately about the Telegram hack and how 15 million accounts were compromised, which is not technically true. There’s 2 vectors of attack at play here, both of which regard Iranian users, but are not connected (other than the attackers probably being the same group). So the two attacks […] The post Telegram Hack...

Why do Amish kids have fewer allergies? The answer may come from the farm

In trying to explain America’s rising rates of allergies and asthma, one of the common theories is that we’re just too clean. And that theory just got a boost by scientists studying traditional farming communities.

The Amish communities concentrated in America’s rust belt share many similarities with other traditionalist sects, including the Hutterites, a group of Anabaptists that live largely in Canada and in the northwestern United States. Both are Christian groups that eschew most modern technology and make much of their livelihood from farming. But they have a key difference: Amish families farm traditionally, using hand-held or livestock-powered tools, while Hutterites use modern farm implements.

RNA-seq: The Challenges to Diving Right In

It’s the hot new technique. With a single procedure, you can get information about all RNA transcripts at once! It sounds like a dream. While RNA sequencing (RNA-seq) has opened the door to exciting new questions, scientists interested in pursuing this technique should be aware of the roadblocks ahead of them. While RNA-seq can be […]

The post RNA-seq: The Challenges to Diving Right In appeared first on Bitesize Bio.

Dutch men and Latvian women are the tallest on the planet, according to the largest ever study of height around the world.
29 Jul 06:16

In what is being called the first-ever test of open-source drug-discovery, researchers from around the world have successfully identified compounds to pursue in treating and preventing parasite-borne illnesses such as malaria as well as cancer. The results have ignited more a dozen drug-development projects for a variety of diseases.
28 Jul 13:16

Linux Kernel 4.4.16 LTS Released with Over 150 Changes, It's Already in Solus

MIT Technology Review | His startup is using data to unlock the connections between DNA and illness.
25 Jul 07:00

Scientists call for replacement of animals in antibody production

Routine scientific procedures using millions of animals are still being authorized when there is a tried and tested alternative, according to a group of scientists investigating the production of antibodies.
25 Jul 05:35

by Charles Bovaird
While steemit has become the third-largest digital currency by market cap, some market observers have expressed doubts about its sustainability.

First CRISPR trial in humans is reported to start next month

Scientists in China plan to use the genome-editing technology CRISPR-Cas9 in patients as early as next month, Nature reported on Thursday. If they go ahead, it would be the first time people would be injected with cells whose DNA has been altered by CRISPR.

A US proposal to run a similar study received approval by a federal ethics and safety panel last month, but it faces months of additional regulatory hurdles before it can go ahead by the end of 2016 at the earliest. The Chinese scientists, led by oncologist Lu You of Sichuan University’s West China Hospital in Chengdu, received approval from the hospital’s review board on July 6, Nature reported, and plan to treat their first patient in August.

CAPE CANAVERAL, Fla. — The first virus-hunter in space is all set to conduct some cosmic, new DNA research.

Newly arrived space station astronaut Kate Rubins will attempt to complete the first full-blown DNA decoding, or “sequencing,” in orbit with a pocket-size device that should be delivered next week.

by Michael del Castillo
The central bank of the Netherlands is preparing an ambitious experiment aimed at discerning if a financial market can be built on a blockchain.

Microsoft says DNA could be a better way to store data for the long term than the magnetic tape companies rely on today.
11 Jul 06:20

A lucrative wrinkle in the CRISPR patent fight

The purported inventors of a hyperbolically promising approach to gene editing are fighting over just who came up with it first. And while it’s anyone’s guess who will prevail, looking at business deals provides a glimpse at how other companies think things might shake out.

By that measure, the Broad Institute has just notched a minor victory.

Since 1975, Sweden has taken a DNA sample from all newborns for medical research purposes, and asked parents’ consent to do so for this research purpose. This means that over time, Sweden has built the world’s most comprehensive DNA database over everybody under 43 years of age. But now, politicians are considering opening up this research-only DNA database to law enforcement and private insurance companies.

It was a treasure to the scientific community, at the same time as it held enormous privacy risks that were not foreseen at the time. Scientists desired to study Phenylketonuria (PKU), a hereditary metabolism deficiency that, among other things, turns the common diet-soda-sweetener aspartame into a lethal poison. A DNA database over the entire population where genes could be traced like this was a marvel, an Alexandria for research. So since 1975, parents have been asked for consent to take a blood sample of newborns to this medical research database.

As the DNA database filled up, it started attracting the attention of law enforcement. As in, “wait, there’s a DNA database over the entire population? Unregulated? What do you mean it’s for medical research only?”

So now, politicians in Sweden have come up with the boneheaded and deceptive idea of opening up the research-only DNA database (Google Translate link) for use beyond the good of humanity – and to use its material against those who donated their genome to it. Politicians have commissioned a report to see if, and how, the database should be opened up not just for law enforcement, but also for private insurance companies. (Hereditary disease? Up go your premiums!)

This is, of course, an outrageous and audacious breach of contract with the parents who were promised the sample would be used only for the good of humanity in terms of medical research. The instant there’s a mere suspicion that this will be used against the sampled newborn in the future – as is the case now – instead of being used for the good of humanity as a whole, people won’t provide the DNA database with more samples, or at least not enough samples to provide researchable coverage.

Thus, politicians have already destroyed the medical research by hinting they are even considering breaking the original contract. But even though the research has been effectively destroyed, most parents won’t know the blood sample can be used to give the newborn higher insurance premiums in the future, so many will continue to consent to enter their newborn into the (now) law enforcement DNA database.

UPDATE: Andy Halsall tweets in response and adds “If the data exists, it’s going to be used”, which is blunt but true.

Supercomputers can’t keep getting faster unless they start eating less power. Chips like those in your phone could make that possible.
24 Jun 06:45

They’re going to CRISPR people. What could possibly go wrong?

Now that a federal biosafety and bioethics committee has approved what would be the first use of the trailblazing genome-editing technology CRISPR-Cas9 in people, the obvious question arises: Could anything go wrong?

The purpose of such a Phase 1 clinical trial is to assess safety, so problems wouldn’t come as a total shock. The fact that the trial in cancer patients (which still needs OKs from the Food and Drug Administration, among others) would be funded by the new cancer institute founded this year by tech mogul Sean Parker adds a wild card. Four potential snafus:

by Michael del Castillo
A senior official for the central bank of The Netherlands recently presented the results of two internal cryptocurrency tests.

Federal panel approves first use of CRISPR in humans

A federal biosafety and ethics panel on Tuesday unanimously approved the first study in patients of the genome-editing technology CRISPR-Cas9, in an experiment that would use CRISPR to create genetically altered immune cells to attack three kinds of cancer.

It had been widely expected that the first human use of CRISPR would be a 2017 clinical trial by Editas Medicine, which announced last year that it plans to use CRISPR to try to treat a rare form of blindness called Leber congenital amaurosis. Only a few hundred people in the US have that disease. The possibility that a study siccing CRISPR on cancer will happen first suggests that the revolutionary genome-editing technology might be used against common diseases sooner than once thought.

Doctors at the University of Pennsylvania seek approval for gene editing to fight cancer.
20 Jun 06:27

by Agnese Mariotti, United Academics
Scientists propose the creation of a synthetic human genome as a follow-up of the Human Genome Project...

Plan to Fabricate a Genome Raises Questions on Designer Humans

by Stephen Turner
How many reads do I need? What's my sequencing depth? These are common questions I get all the time. Calculating how much sequence data you need to hit a target depth of coverage, or the inverse, what's the coverage depth given a set amount of sequencing, are both easy to answer with some basic algebra. Given one or the other, plus the genome size and read length/configuration, you can calculate either. This was inspired by a similar calculator written by James Hadfield, and was an opportunity for me to create my first Shiny app.

Check out the app here:
http://apps.bioconnector.virginia.edu/covcalc/

And the source code on GitHub:
https://github.com/stephenturner/covcalc

Give it your read length, whether you're using single- or paired-end sequencing, select a genome or enter your own. Then, select whether you want to calculate (a) the number of reads you need to hit a target depth of coverage, or (b) the coverage depth you'll hit given a set number of sequencing reads. Once you make the selection, use the slider to adjust either the desired coverage or number of reads sequenced, and the output text below is automatically updated. 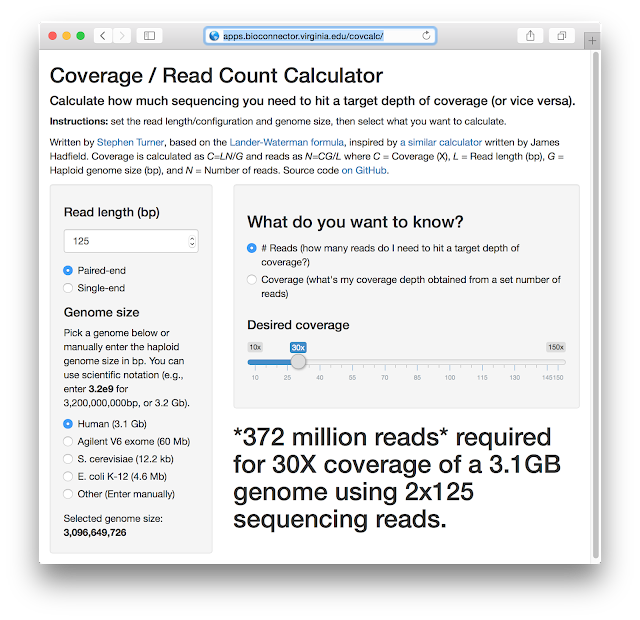 X-Men, step aside: Check out real-life mutants with these 5 amazing superpowers

As you watch the X-Men punch and kick on movie screens across the country, another kind of mutant might be sitting right next to you, munching popcorn. The medical literature is peppered with tales of these nonfiction mutants: People whose genetic mutations give them unbreakable bones or incredible flexibility or eye-popping strength.

Here, five superpowers that would have even a comic book hero green with envy.