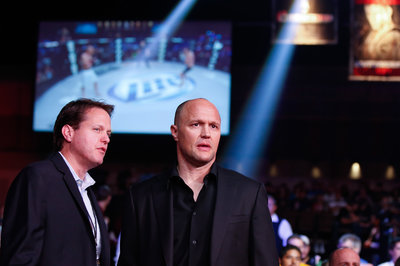 Last night (Sept. 27, 2013), Bellator held the opening round of its lightweight tournament live from the Rose Garden Arena in Portland, Oregon. The card was headlined by a bantamweight bout between Joe Warren and Nick Kirk, which was originally scheduled for Bellator 100 before Warren was pulled for medical reasons.

The lightweight tournament winner will face the victor of the upcoming bout between Mike Chandler and Eddie Alvarez which is set for Bellator's first foray into pay-per-view. This tournament featured three Ultimate Fighting Championship (UFC) vets (see 'castoffs').

With the fights complete, let's talk about last night.

Joe Warren returned to the Bellator cage last night and successfully beat Nick Kirk by submission. That's awesome. It's been a long time coming and I'm stoked he was able to pick up the W. It also means that he's one win away from earning a shot at the Bellator bantamweight title. GREAT NEWS!

Now for the downside because I love being super negative and providing the reality of a situation: his striking is still atrocious. Not just that hilarious attempt at a spinning back kick (check out the .gif). I'm talking about the fact that he's still getting hit. A lot. And only resorted to getting the takedown after Kirk landed several hard shots to the head.

While it's awesome he wants to be somewhat exciting and fan-friendly, he's also got to start thinking about his overall health. When a commission denies you a license because of a scan of your brain, you gotta start taking defense seriously. He's a wrestler. And a very good one at that. Just wrestle people and get it down on the microphone.

Okay, this one is pretty obvious. Rich Clementi never found much success inside the UFC's Octagon. Sure he picked up that win over Melvin Guillard, but for the most part, he's just a guy who is better on the regional level than the big leagues.

And last night was a perfect demonstration why.

He was getting picked apart on the feet and instead of trying to figure out a realistic path to victory, he was content talking shit and letting Triloni walk away with a win. Thanks Rich Clementi. Keep on being you.

It's pretty clear why Bellator decided to load up its lightweight tournament with aged UFC fighters. From a promotional sense, they can say "our lightweights are better than their lightweights", even though none of them were really all that successful inside the UFC's cage.

But even if they weren't the best, their performances last night were shockingly awful. John Alessio gassed out. Marcus Davis got smashed. And Rich Clementi fought like Rich Clementi. As Charles Barkley would say, "turrible."

Check out the full results for Bellator 101 here.