There's a lot of conversations about what Sony's gonna do about whatever Microsoft is doing, and how they gotta do stuff, and they gotta counter this, or address the other thing. So, this type of rhetorical framework makes Sony's bog-standard service refresh - with a side of trying to make PlayStation Now happen - into some kind of console war salvo when it's actually just whatever.

As I've suggested before, I'm not paying for game streaming; that's a big part of the additional offerings in these new tiers. Game streaming already works better than I ever thought it could, but if I'm not in front of a computer or a console I'm not gonna play fucking Gears on my phone while I wait for my pho. Not even the tactical one! For one thing, pho basically comes out immediately. There's barely any time. And two, if I simply couldn't bear the counsel of my own thoughts any longer, I'd play a game native to the phone. There's a couple.

But that's me. I have all the equipment because it's my hobby and it's important to me. And I already played all these games when they came out, if I felt like it. Retro doesn't really work on me unless it's being interrogated as a concept; I need that kinda shit manifested in an upmarket way. Sony says they're not doing the Game Pass thing of putting new games in these service variants because they like the way it works now, where people purchase games and play them on PlayStation hardware. And it's like, yeah! That's a good system; I feel like that one's been on for a hot minute. But they've got this streaming thing in their back pocket, and Microsoft does as well, because I think the "next console" from each of them is going to be an HDMI stick. I don't want that at all, but I'm not the billions of global customers these two are actually playing for. They couldn't address that audience with their marquee hardware even if they wanted to.

Playing Tunic over at Mr. Gribbz' house last Wednesday was super fun, and so we've decided to do more of that today from 2-4pm PST. We started last week's game trying to get to a specific place, and finally figured the path out after playing for exactly the length of time we allotted for the stream. Now, in the guise of a young fox child, we travel West.

Google has replaced its homepage logo with a Doodle celebrating the birthday of German composer and pianist Fanny Hensel.

I'm going to list a small list of pet peeves I have with Overwatch, small gameplay choices which fits Blizzard view of "gameplay should trump logic" but rustle my jimmies.

Junkrat - His bombs damage him, but his land mine do not,  even though it can be used to propel him.

D-Va - The pilot gun does more damage than the big mech gun. I mean.. wtf, just put the damn pistol outside!

Zenyatta - He is made of metal but has no armor.

Maps - You can land on some part of some roofs, but can't on others. There is no way to know before trying.  The start of Dorado is like that.

Overtime - Dozens of times I lost while stepping on the point. It's the opposite of TF2 where anyone a feet away from the point basically blocks the capture.

Oddly enough, I don't mind Hanzo arrows hitbox because I think otherwise he would never hit anyone. I do, however, get preeeeetty salty about how fast a Widowmaker can wipe a team with multiple quickscopes.

While Ubisoft’s Tom Clancy’s Ghost Recon Wildlands [official site] might seem sooo serious about its imperialist fantasy, apparently Ubisoft are saving some cracking japes for DLC. A series of missions will have players poke at something called ‘The Unidad Conspiracy’, which I can only imagine is a supernatural entity composed of hundreds of dads twisted and merged into one flesh. Clad in a vast cardigan, the Unidad lumbers across Bolivia telling those naughty drugmen it’s past their bedtime. I imagine that even the Ghosts eventually face daddification and must fight back. That’s probably it.

Oh, and Ubisoft also plan to release a 4v4 PvP mode in a free update, and two paid expansions, and… the point is, imagine that giant dad! He’s going to be amazing.

The PvP mode will be free, team-based, come “a few months after launch”, and- that’s about all I can tell you “More information about PvP will be available at a later date,” Ubi say.

But what if you’re sick of this awful money in your pockets, a wad of cash so whopping it pulls your shorts down and people in the street laugh at your bare bottom? Ubisoft have you covered there too!

They’ve announced a DLC expansion pass and its constituent add-ons. Two big expansions are planned, which will be available one week early to folks who buy the season pass. That always seems such a petty way to nudge players into buying the pass. The pass will also throw in some boosters, outfits, a minibus, and other odds and ends.

Anyway! The first big expansion will be Narco Road, which Ubisoft say has a “more eccentric tone” with a dozen missions that “will give you the full spectrum of narco life”. That two ends of that spectrum seem to be driving fast cars and murdering people. The expansion will also add new vehicles, weapon skins, and side activities. Fallen Ghosts, the second expansion, will see the Ghosties on the ropes as their evac chopper is shot down and they’re tracked by a group of mercenaries. New weapons and skills will be in along with that.

Here, this trailer looks at ’em both:

The season pass also covers The Unidad Conspiracy [Mate, come on: you wrote ‘Unilad’ -ed.], which is a set of three missions. Neatly, folks who played in the closed or open beta and buy the game before March 31st will get those for free. Because who would want to miss out on hunting this big dad? His name is El Comandante, I know for a fact, and I’m fairly certain I’m correct in guessing he’s actually hundreds of dads formed into one massive dad, like the meatgolem in final battle of Helldriver but with a lot more tense silence. Sorry for the spoilers, gang!

Ghost Recon Wildlands is due out next Tuesday, March 7th. DLC will… follow? Ubisoft haven’t confirmed a price for the season pass but, given that the Gold Edition including it costs an extra £25 and is listed as having a £10 discount, I’d guess maybe £30 or £35.

I’ve just learned that ‘Unidad’ is Spanish for ‘Unity’ so wow, Ubisoft snuck a pun into the name too. Amazing! Dads love puns!

Paint cans are dumb. Have you ever tried talking to one? Why would you do that? Paint cans can't talk. Because they're dumb, which you can also see in Acid Nerve's new game, Telepaint. While a far cry from toppling titans, the game's puzzles are still looking to challenge you. Based on a jam game made years ago, players will work to guide the lemming-like cans of paint through teleporters that will help them reach their paintbrush buddies. They mindlessly walk along any path, so it's up to the player to make sure their route is safe.

Spilling paint is expensive, but doing so in a game shouldn't be so bad when the game releases on iOS soon.

For Lack of a Better World

by yasaman
Have you ever felt avenoir, the desire that memory could flow backwards? Or maybe you've worried that everything has already been done, every photograph has already been taken, every poem you can think to write already written. The word vemödalen is here for you. Or maybe you're frustrated at being stuck in one body, in one place, unable to explore more of the world. John Koenig has a word for that too: onism.

The Dictionary of Obscure Sorrows (previously and previouslier), once just a tumblr, is now also an ongoing Youtube series by John Koenig.

Seal Your Home for the Winter Against Outdoor Critters 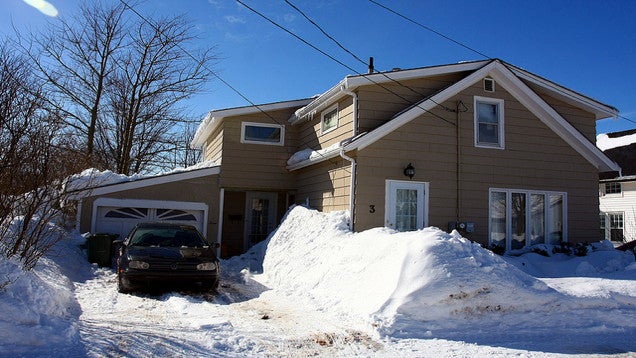 When it starts getting cold outside, creepy critters want to stay warm. Mice and bugs realize your house is warmer than it is outside. Now's the time to stop them at the gates before they join you for the winter.

We've seen rumors of new Surface covers and docks; now, it's time for rumors regarding the tablets themselves. Both Neowin and WinSuperSite claim that the next-generation Surface with Windows RT will simply be called the Surface 2, and should represent a performance boost rather than a complete reinvention. In addition to the already confirmed Tegra 4 processor, the new Microsoft slate reportedly includes a sharper 1080p display and 4GB of RAM in an otherwise familiar design. The only noticeable changes to the form factor would be a more flexible two-stage kickstand and a white option, according to tipsters. There's no word on when the Surface 2 might reach stores, although the mid-October launch of Windows 8.1 would certainly be convenient. We'll likely find out more at the September 23rd event.