IMPOTUSx2 only visited one DC restaurant during his tenure: the steakhouse in his own hotel.

... when the star appeared, you had to stick to the script. A "Standard Operating Procedure" document, recently obtained by Washingtonian, outlined step by step exactly what to do and what to say anytime Trump dined at BLT Prime, the hotel restaurant.

As soon as Trump was seated, the server had to "discreetly present" a mini bottle of Purell hand sanitizer. (This applied long before Covid, mind you.) Next, cue dialogue: "Good (time of day) Mr. President. Would you like your Diet Coke with or without ice?" the server was instructed to recite. A polished tray with chilled bottles and highball glasses was already prepared for either response. Directions for pouring the soda were detailed in a process no fewer than seven steps long—and illustrated with four photo exhibits. The beverage had to be opened in front of the [germaphobe] commander in chief, "never beforehand." The server was to hold a longneck-bottle opener by the lower third of the handle in one hand and the Diet Coke, also by the lower third, in the other. Once poured, the drink had to be placed at the President's right-hand side. "Repeat until POTUS departs."

BLT Prime? BLT is a bacon, lettuce, and tomato sandwich, not a steak.

Latifi: Imola an improvement after “worst race of the year” in Portugal | RaceFans Round-up

by Keith Collantine
In the round-up: Latifi: Imola an improvement after "worst race of the year" in Portugal • Jack operator Stroll hit "is okay" • Radiator fault put Gasly out

by Dieter Rencken
George Russell was thankful for Formula 1's Halo driver protection system after colliding with a wheel which came off Antonio Giovanazzi's Alfa Romeo during the Belgian Grand Prix.

by editor@premierguitar.com
A lightweight speaker cabinet with a custom-designed full-range speaker. by editor@pitpass.com
Brakes are high priority for F1 teams. If they are not working optimally or a driver uses them incorrectly, it can prove costly - both for lap time and track position.
28 Jul 09:23

by editor@pitpass.com
We had a successful Friday covering all of our planned test items. It is a track that suits the characteristics of our car
12 Nov 02:43

Hamilton set for back row start after crash

Toro Rosso shows off all 10 of its Formula 1 challengers to date in this special 360° morphing video.

by Tavarish on Car Buying, shared by Matt Hardigree to Jalopnik

Mercedes-Benz makes great luxury super-sedans, and their newly unveiled Mercedes-Maybach S600 is no different, touting cutting-edge comforts that your E-class-leasing manager could only dream of. But here's something your boss doesn't know: This $250,000 car is almost completely useless.

Raikkonen would welcome Vettel as teammate

Ferrari is yet to confirm the news, but the famous team looks set to enter the 2015 season with Sebastian Vettel alongside Kimi Raikkonen.
19 Sep 19:31

Hamilton on top in Singapore as Rosberg and Vettel are thwarted

by jhynesadmin
Lewis Hamilton logged the fastest time of day in Singapore, his lap of 1:47.490 being good enough to see off a challenge from the fastest driver of FP1, Fernando Alonso, by just over a tenth of a second. Daniel Ricciardo was third fastest in FP2 with a lap of 1:47.790. But the time sheets from […]
07 Sep 04:32

by carwitter on Oppositelock, shared by Patrick George to Jalopnik

Nissan redefined the C segment back in 2007 with the launch of the Qashqai. Moving away from the traditional family hatchback market they have had wild success in pioneering the Crossover segment.

Force India recover from qualifying to get 10 points

Fernando Alonso and Lewis Hamilton have both featured in ESPN's list of the 25 top-paid athletes in the world
04 Apr 07:24 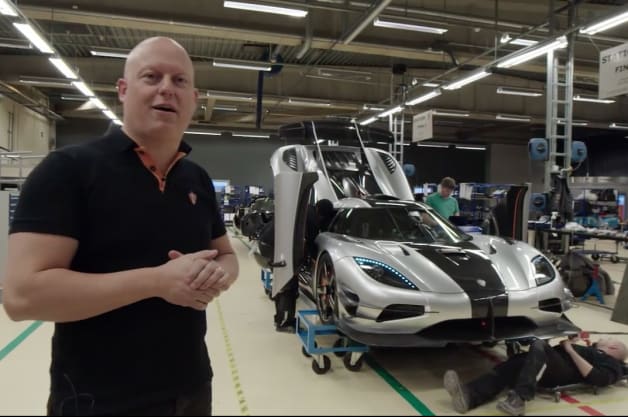 The Koenigsegg Agera One:1 has opportunity to become the new king of the supercar world. Its twin-turbocharged, 5.0-liter V8 has been tuned up to 1,341 horsepower (1,360 PS) thanks in part to its proprietary, 3D-printed variable geometry turbos. Plus, with power equal to one megawatt, the company claims it has created the world's first megacar.

Even into prototype form, the One:1 shows what is possible when modern technology is taken to its limits. The test car weighs around 2,998 pounds (1,360 kilograms), and Koenigsegg thinks it can shed a further 66 lbs for the production versions. However, the megacars are going to be quite rare. The company is building just six of them, and all of them are already spoken for.

In this video, Christian von Koenigsegg goes into the details of his latest creation. He shows off all of the car's little secrets from its sophisticated suspension to many of the tactics it uses to shed weight. Scroll down to get a tour of the One:1 from the man who knows it best.

Christian von Koenigsegg puts finishing touches on first One:1 originally appeared on Autoblog on Thu, 03 Apr 2014 19:16:00 EST. Please see our terms for use of feeds.

by editor@pitpass.com
It's been a solid start, but the key fact is that there's plenty more to come - both this weekend, and for the forthcoming races.
19 Feb 07:40

Upgraded Samsung flash 'will be used in the next Galaxy smartphone'

With less than a week to go before the expected Galaxy S5 launch at Mobile World Congress in Barcelona, Samsung has today handed us one small piece of the GS5 hardware puzzle. In a post on the Samsung Tomorrow blog, the company has revealed a range of new LED flash parts for upcoming smartphones. The components include reflector-integrated packages, side-view LEDs and a flip-chip flash LED. And according to Samsung, one of the reflector-integrated flash LEDs — the 3432 1.8t — will be included in "the next Galaxy smartphone, which is expected to be introduced later this month." That'll be the Galaxy S5, then.

Guitar Effects: Overall the pedal is impressive and has amazing qualities for my application.
18 Feb 01:01

by Keith Collantine
In the round-up: Red Bull took "risks" with cooling • No foul play in Schumacher ski crash

Mercedes jumps the gun on Detroit debuts with some help from Kelly Rowland
No more posts. Check out what's trending.