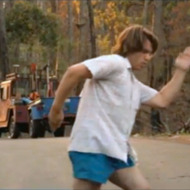 Here's the first trailer for David Gordon Green's Sundance hit Prince Avalanche, Green's first movie since 2011's Jonah Hill vehicle The Sitter and a return perhaps to slightly less commercial fare. Paul Rudd and Emile Hirsch star as highway employees working in remote parts of Texas, and the entire movie is pretty much just them. (Well, them and a donkey, though the donkey left all the improvising to Paul Rudd.) Green made his mark with quieter movies like All the Real Girls, and this looks like sort of a hybrid of that style and his later work like Pineapple Express: Set outdoors, with tenderly depicted characters, but now with an added goofiness.