"Look at that asshole [Orson Scott Card] that wrote this new Harrison Ford movie [Ender's Game]. I think that you can have any opinion you want, but at least be willing to take the consequences of your opinion. It’s like, 'Well, I hope that people will be more understanding,' or what did he say? 'More tolerant of my views.' The quotes that got me about him weren’t against gay marriage -- he wanted homosexuality criminalized in the United States. That's what he called for. You want me to be tolerant of you wanting to criminalize homosexuality? Fuck you on your grave, you piece of shit." - Harvey Fierstein, telling it like it is to the Hollywood Reporter.
Angietupelo likes this
14 Jul 10:24

Quote Of The Day - Kathleen Kane 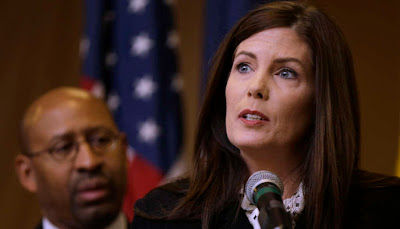 "I cannot ethically defend the constitutionality of Pennsylvania's (law banning same-sex marriage), where I believe it to be wholly unconstitutional." - Pennsylvania Attorney General Kathleen Kane, confirming earlier reports in comments made this morning to reporters at the National Constitution Center in Philadelphia.  A spokesman for GOP Pennsylvania Gov. Tom Corbett has declined to comment on Lambda Legal and the ACLU's joint lawsuit to overturn the ban.
Angietupelo, Jonathan.holm likes this
10 Jul 01:05

"The reality is that so-called pro-life movement is not about saving babies. It’s about regulating..."

“The reality is that so-called pro-life movement is not about saving babies. It’s about regulating sex. That’s why they oppose birth control. That’s why they want to ban abortion even though doing so will simply drive women to have dangerous back alley abortions. That’s why they want to penalize women who take public assistance and then dare to have sex, leaving an exemption for those who become pregnant from rape. It’s not about babies. If it were about babies, they would be making access to birth control widespread and free and creating a comprehensive social safety net so that no woman finds herself with a pregnancy she can’t afford. They would be raising money for research on why half of all zygotes fail to implant and working to prevent miscarriages. It’s not about babies. It’s about controlling women. It’s about making sure they have consequences for having unapproved sex.”

I know I’ve posted this piece before, but if you haven’t read it, YOU MUST. Campaign To Boycott Movie Written By NOM Board Member Heats Up 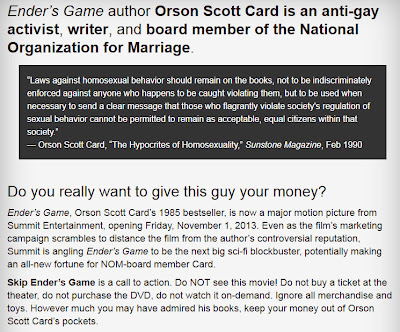 The sci-fi action movie “Ender’s Game” isn’t out until Nov. 1, but it’s already the target of an organized boycott. The group Geeks Out has launched an online protest and is asking people to “Skip Ender’s Game” because of anti-gay marriage comments made by Orson Scott Card, author of the 1985 book upon which the Lionsgate film is based.  "Do not buy a ticket at the theater, do not purchase the DVD, do not watch it on-demand. Ignore all merchandise and toys," the site implores. “By pledging to Skip Ender’s Game, we can send a clear and serious message to Card and those that do business with his brand of anti-gay activism -- whatever he’s selling, we’re not buying."

The boycott and petition site is here. (Tipped by JMG reader Neil)

PREVIOUSLY ON JMG: Orson Scott Card calls for Christians to overthrow the government over same-sex marriage.  Petition launched for DC Comics to fire Card, who had been hired to write an issue of Superman. Brian Brown gets outraged over threats to boycott DC Comics.  Illustrator pulls out of Superman issue over Card's hiring.
Angietupelo likes this
20 Jun 23:46

"Most readers won’t know that the updated policies announced last week by the Social Security..."

“Most readers won’t know that the updated policies announced last week by the Social Security Administration (SSA) are among the most humane and important public policy advancements for transgender people during the Obama administration or even ever.”

Great article written by the amazing Mara Keisling with the National Center of Transgender Equality. Read this article, and then go to NCTE’s website to utilize all of their amazing resources.

Angietupelo likes this
No more posts. Check out what's trending.